McIlroy blown off course at brutal US Open 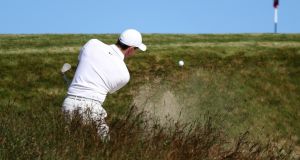 Rory McIlroy plays a shot from a bunker on the 11th hole during the first round of the US Open at Shinnecock Hills. Photograph: Rob Carr/Getty Images

Windy conditions quickly helped send scores soaring on the first day of the 118th US Open at Shinnecock Hills, with former champions Rory McIlroy and Jordan Spieth among the high-profile victims.

McIlroy and Spieth and were among the early starters hoping to take advantage of a course softened by Wednesday’s rain. But their hopes soon nosedived in the space of just a few holes in New Jersey.

McIlroy had been bullish about his prospects after a lengthy spell of preparation at Shinnecock and other courses on Long Island, but his prospects of a second US Open title already look slim.

After two early bogeys the Northern Irishman found sand with his approach to the 13th and compounded the error by three-putting from 30 feet, before a wayward drive on the next left him unable to hack out of the thick rough at the first attempt.

That led to a second consecutive double bogey before he stopped the rot on the 15th with a birdie, remarkably the first from anyone in the group. That was as good as it got for him though as two further bogeys saw him reach the turn at seven over. And yet another double bogey at the first hole, again courtesy of a trip to the fearsome rough, saw him plummet to nine over after 10 holes.

Spieth three-putted the 10th, his opening hole, and ran up a triple-bogey on the next after hitting a bunker shot across the green and needing two more attempts to find the putting surface.

Former Masters champions Bubba Watson and Charl Schwartzel were both three over par after three holes, while England’s Scott Gregory was 10 over after seven.

American Scott Stallings had managed two birdies in his first seven holes but was still seven over par after taking a quintuple-bogey nine on the 14th.

At the other end of the leaderboard, Australia’s Aaron Baddeley had birdied the 10th and 12th to lead on two under, a shot ahead of a large group which included defending champion Brooks Koepka, England’s Ian Poulter and Scotland’s Russell Knox.

Poulter’s second birdie of the day on the seventh took him into a share of the lead with Knox, Matt Kuchar and Charley Hoffman, Knox having picked up a shot on the 14th.