Korhonen beats the clock in Austria 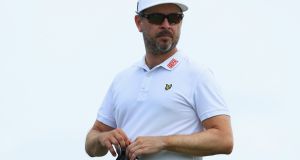 Mikko Korhonen of Finland looks on from the eighth tee during day three of the 2018 Shot Clock Masters at Diamond Country Club on Saturday in Atzenbrugg, Austria. Photograph: Matthew Lewis/Getty Images

Korhonen took a five-shot lead into the final round at Diamond Country Club in Austria and carded a closing 69 to finish 16 under par, six shots ahead of Scotland’s Connor Syme.

Syme (22), who only turned professional last September and was ranked 836th in the world at the start of the week, holed from 60 feet for a birdie on the 18th to finish outright second, a shot ahead of Steve Webster, Nicolas Colsaerts, Justin Walters and Raphael Jacquelin.

Ireland’s Ruaidhrí McGee finished in a share of 35th place on three under par.

Jacquelin reduced Korhonen’s overnight advantage to three shots after four birdies in the first seven holes but the Finn birdied the third before play was suspended for 75 minutes due to the threat of lightning.

The 37-year-old, who needed eight attempts to earn his European Tour card via the qualifying school, picked up further shots on the fifth and sixth when play resumed before carding his first bogey of the week on the ninth.

A birdie on the next quickly settled any nerves and despite another bogey on the 12th following the second stoppage in play, Korhonen was never in danger of being caught.

“It feels great, beautiful,” Korhonen said. “It’s been a long wait so it feels so good. I’ve been up there a couple of times and couldn’t do it at those times, but now I’m so happy and relieved that I have done it.

“It’s not easy to win, especially not the first win, so I’m really happy to have done it. I have no words, it’s so good.”

“I’m absolutely over the moon,” the former Walker Cup player said afterwards. “That was a massive bonus on the last and you could tell by my reaction how much it meant to me.

“I’ve had a couple of decent results but it’s been a pretty slow start to the European Tour since I gained my card. This will definitely turn things around no matter what.

“It always felt like a special week and I just fancied to do something really class near the end and to hole that putt was just a dream come true.”

Four players received one-shot penalties during the week for taking more than the allotted time to play their shots, while Andrea Pavan successfully appealed against his penalty in the third round.

Pelley told Sky Sports: “I think we saw this week that this can definitely improve the game. It also shows that if players get into the mindset then they can play quicker.

“I think it makes for a better viewing experience, better customer experience at the tournaments and the golfers love it.”