US Open: safety first off the tee for McIlroy at Shinnecock Hills 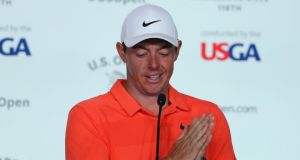 Rory McIlroy has said he will adopt a conservative approach off the tee at this week’s US Open. Photograph: Warren Little/Getty

Rory McIlroy might be sniffling from a hay fever allergy to pollen from the high fescue grasses here in the Hamptons but it won’t be an issue as the Northern Irishman sets out in his bid to claim the US Open championship, after a build-up that involved playing what he called “fun” golf at a number of other courses on Long Island.

Without a Major title win since 2014, McIlroy is aiming to end that drought in this 118th US Open on the famed Shinnecock Hills links but he took time out to play neighbouring courses Friar’s Head, The National and Garden City to ease his way into that highly-pressurised quest for a fifth career Major.

“It’s just been fun. I think from Wentworth to Memorial I played 18 out of 19 days. So I took a day off on Saturday just to sort of try to recharge the batteries. But it’s been a lot of fun. It’s not a bad place to spend a couple of weeks in the summer,” said McIlroy of his decision to set up camp in the Hamptons, rather than return home to Florida for his preparations.

“My game feels good. I’ve played myself into a few final groups. The first Major of the year (at the Masters in April), I played well. I sort of struggled a little bit on Sunday. But I’ve got a win this year (at the Arnold Palmer Invitational), which is great. I’ve gotten myself into contention quite a few times so would love to do that again this week. It feels like it’s been a while since I’ve been in the mix at this championship. With how my game feels, hopefully I can do the right things over the first few days and put myself in a position to win another one.”

McIlroy’s last win in a Major came in the 2014 US PGA and he has missed the cut in the past two US Opens, at Oakmont and Erin Hills. However, he has amassed more world ranking points than anyone so far this year and comes in here on the back of a runner-up finish in the BMW PGA at Wentworth and a top-10 at the Memorial.

“I think I’ll adopt quite a conservative strategy off the tee, you’re hitting into big targets. So even if you’re leaving yourself back and maybe hitting a couple of extra clubs into these greens, it’s not such a bad thing. I’d rather be doing that than hacking my way out of the rough. So that’s sort of my strategy this week.”

McIlroy is in a rented house just three minutes from the links which has ensured he has avoided the heavy traffic congestion that has proved problematic for many - including other players - getting to the course.

The local police has reacted to the congestion by making a number of adjustments to the traffic plan and also advising local workers and homeowners to avoid travel during peak morning hours to assist traffic flow.