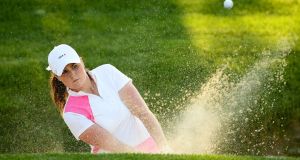 Olivia Mehaffey on day one of the 2018 Curtis Cup at Quaker Ridge in Scarsdale, New York. Photograph: Getty Images

A dominant foursomes display put the United States ahead of the Britain and Ireland team at the Curtis Cup after Friday’s play.

The US had a 2-1 lead after the four-balls, with Olivia Mehaffey (Ireland) and Sophie Lamb rallying from three down on the 12th to halve a point with Jennifer Kupcho and Lucy Li.

Americans Lilia Vu and Kristen Gillman took their match against Alice Hewson and Lily May Humphreys 4&3, while Paula Grant (Ireland) and Shannon McWilliam ended up all square with Lauren Stephenson and Sophia Schubert.

Grant and Humphreys took a one-shot lead in their foursomes against Stephenson and Gillman, but ended up going down 4&2, while six strokes on the 18th saw Hewson and Clyburn lose by two to Kupcho and Vu.

The only success for the Britain and Ireland team in the foursomes came from Mehaffey and Lamb who beat Galdiano and Lee 3&2 to put the US ahead 4-2 ahead of Saturday’s four-ball.

Mehaffey is a 20-year-old Irish amateur, on scholarship at Arizona State.