Mickelson back for another tilt at completing career Grand Slam 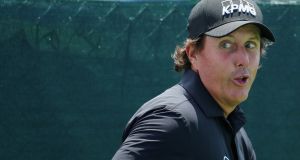 Phil Mickelson during his practice round yesterday prior to the US Open this week at Shinnecock Hills. Photograph: Warren Little/Getty Images

No high school graduation to attend this year. No distractions. In his attempt to solve the impossible puzzle, Phil Mickelson – thwarted not once, not twice but six times a runner-up in his quest for the US Open title – is back for another shot, another attempt to find the missing piece of the jigsaw that would enable him to claim a career Grand Slam.

His is an example of how to take a reality check in life.

On starting out his career, this, of all the Majors, was the one that seemed most likely to be owned by Mickelson. But, time and time again, fate has teased only to reject Lefty, to the point where time is slipping away. Come Saturday, the candles atop the cake will light to remind him, and everyone, that he has reached his 48th birthday. Blowing them out will be the easy part.

The more difficult assignment for Mickelson in yet another birthday week will be to conquer the course and those others with designs on the title. It’s another chance to join that so elite club of Hogan and Nicklaus, of Woods and Sarazen, and of Player too. Only five men have achieved the career Grand Slam and only Mickelson has the chance this week to make it six.

For Mickelson, a man with five Major titles (three Masters 2004, 2006, 2010; one PGA 2005, and one Open 2013), the one that seemed most likely has proven the most elusive. And, more than anyone, he knows that this golf, with its fickle bounces, doesn’t do entitlement. If he is to find that missing piece, he is going to have to get on his hands and knees and search for it.

Mickelson didn’t bother searching for any US Open trophy a year ago, opting instead to place family duties ahead of golfing ones. He stayed away from Erin Hills and attended his daughter’s graduation from school, only settling down to watch the golf on television as Brooks Koepka outmuscled the Erin Hills course and everyone else.

At Monday’s press conference, the wind buffeting the media centre to remind him and us that it will be a factor for whoever gets to hold the famous trophy come Sunday evening, Mickelson – playing in his 27th US Open, more than anyone in the field – was as full of anticipation for the battle ahead as his first appearance, back in 1990. Nearing the end of a third decade of trying, his eyes are only on one prize . . . . except, just not yet. He doesn’t want to put the cart before the horse. Not at this stage of his career.

“I really love the challenge, I love that I have another opportunity to try and complete the career Grand Slam. My goal, though, is not to try and win on Thursday. My goal is to stay in it Thursday, stay in it Friday, and have an opportunity for the weekend. So, I’m not really thinking about winning right now. I’m thinking about getting in it for the weekend. But, certainly, the final leg for me of completing the Grand Slam is this event.”

As if to underscore that feeling, in his own mind as much as planting it in the minds of those listening, Mickelson added: “I’m trying to get myself in position for the weekend because, when you try to go out and win a US Open, you lose it quick.”

Had he ever gone out on a Thursday trying to win? A smile, and an answer. “Yes, and I was home Friday night!”

So, Mickelson has learnt many a lesson through the years. Now, it’s about making sure that he puts them to good use.

“It’s the same [desire] to win. When I first came out, I just wanted to win any Major. Any tournament, any Major. It wasn’t US Open specific or Masters. It was any Major. Now that’s I’ve won the other three Majors, it is US Open specific. I would love to win this one to win all four. That’s certainly a goal and nothing I’m shying away from.

“But, again, the more I think about winning, the more it detracts from my focus and the process of playing a round on Thursday. So I don’t really want to try to win right now. I just want to get in for the weekend.”

His form so far this season would indicate that his game is in fine fettle, with five top-10s in 13 tournaments, including a win in the WGC-Mexico championship.

If he is to break the code, to finally find the solution, Mickelson isn’t doing anything different. He arrived to Shinnecock Hills contemplating changing some of the clubs in his bag. But he has decided not to, that he would stick with the same set-up as he’s used all season.

“I had three or four potential clubs I was thinking would work out there, but when I got here, the normal set-up was going to do just fine, meaning I have a 2-iron that I fly roughly 250 yards. That’s going to be used a lot off the tee if the fairways are fine. The 3-wood I’ll use a lot if the fairways are soft. The driver I’ll use three or four times on certain holes. I do not need a speciality club off the tee or around the greens . . . . all the normal stuff will be in play this week.”

Michael Darragh Macauley calls time on Dublin career 11:27
Rory McIlroy bursts out of the blocks with a 64 in Abu Dhabi 11:32
Uefa considering switch to single host venue for Euro 2020 10:15
Pogba wins it for United; Dave Hannigan recalls first taste of emigrant life 07:04
Hurling between the high rise flats: My first glimpse of the emigrant life 06:51
Here is your handy guide to sport on television this week