US Open: Shinnecock Hills full of horrors for Rory McIlroy 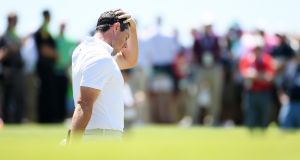 Rory McIlroy shot an opening round of 80 at the US Open. Photograph: Ross Kinnaird/Getty

You’d swear Freddy Krueger or Chucky or some other scary character lurked in the sand hills, for the temptation at times was for us to peek through slightly-parted fingers. Rory McIlroy was dragged into a horror show in the first round of this 118th US Open and his only minor solace was that he had company: Phil Mickelson and Jordan Spieth were also victims of a murky plot that unfolded here in a first round that left them bewildered.

There was no hiding place, not for any of this marquee group. The course devoured them. McIlroy signed for a 10-over 80, Spieth a 78 and Mickelson, the old man of the trio, a 77. The men with 12 Major titles between them, all missing one leg of the career Grand Slam, were a combined 25-over-par for their day’s work.

Was it any wonder there was a reluctance to speak afterwards?

McIlroy skipped out behind the media flash area to find the sanctuary of the players’ room, although he did stop briefly to talk firstly with Dermot Byrne, Shane Lowry’s caddie, and then to Lowry himself. It ended with Lowry offering a consoling pat on the shoulder to McIlroy.

In the locker room, a second request was put to McIlroy. “What do you want me to say? I shot 80. I’m disappointed.”

And, in truth, that disappointment was something he had hauled around like a Sherpa lugging a backpack for over five hours, as McIlroy’s quest for the championship suffered too much damage on a front nine where he suffered back-to-back double bogeys at one point. It was a testing day, as the wind whipped over the links with the flags atop the grandstands performing the optical illusion of fluttering in different directions.

McIlroy - who’d put his phone away during the week to fend off any distractions, and who’d talked of being in the right frame of mind after a diligent preparation - was left to reflect on a round which was a struggle from beginning to end. He hit only seven of 14 fairways and managed to find five of 18 greens in regulation. His 80 equalled his worse rounds career rounds in the Majors, an 80 in the second round of the Open at St Andrews in 2010 and his final round 80 of the Masters in 2011.

Where did it all go so wrong? Well, two horror holes stood out in pinpointing where the wheels ran away from the chariot. On the 13th, his fourth hole, McIlroy’s approach leaked right and plunged into a greenside bunker. His recovery shot came out fast and low, skating across the green and reluctantly staying on the putting surface. But he three-putted, a double-bogey six.

At that stage, the scoreboard carrier’s proof of their misery was plain to see: 4-4-3, all in black to indicate over-par scoring. And, on the 14th hole, it got even worse for McIlroy when his tee-shot down the right finished in heavy fescue. How bad? Bad! It required a search party to eventually find the ball, which led to a round of applause from the spectators behind the ropes.

“Man, that thing was buried,” said a marshal to no-one in particular. And he was soon proven right in his observation, as McIlroy - with his power - could only forward the ball a matter of feet into further heavy rough. All he could do was to hack out, back onto the fairway. By the time the ball found the bottom of the tin cup, it was for another six; another double-bogey.

A glimmer of hope? That came, only too briefly, on the 15th when he rolled in a birdie putt. Manna from heaven. He fist-pumped the air in front of him, a show of fight. But that was sucked straight back out of him on the Par 5 16th when he took two shots to escape a fairway bunker and ran up another bogey.

On such days, you just can’t buy a break. McIlroy’s approach to the 18th, his ninth, hit the putting surface but rolled on and on, eventually stopping in the hairy grasses outside of a greenside bunker. Again, his bid to get up and down for a par save proved beyond him. Nine holes into his US Open, and the writing was on the wall. In big plain writing. . . seven over through nine holes! 42 strokes.

“Don’t give up bud,” pleaded a fan as McIlroy made his way from the 18th green to the first tee to continue his round. It didn’t get any better, though. On the first, McIlroy’s desperate battle brought another double-bogey, the first time in his career in the Majors that he’d suffered three double-bogeys in the same round.

By the time the trio reached the 18th green, some five and a half hours after starting, their steps were more laboured. The spring had been taken out of them. McIlroy’s approach ran through the green and his delicate chip, downhill to the hole, stopped quickly before breaking into motion. Spieth waved it on. But it didn’t roll on, and McIlroy finished his round with a bogey - and an 80 - that was as unfathomable as a Rubik cube. How did that happen?