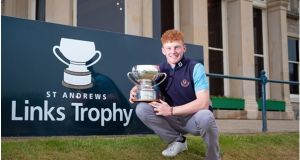 John Murphy from Kinsale becomes the third Irish winner of the St Andrews Links Trophy following his playoff victory on the Old Course at St Andrews.

Kinsale’s John Murphy holed the most important putt of his career to win the St Andrews Links Trophy following a sudden death playoff.

Murphy finished level with Germany’s Jannik du Bruyn on nine under par after carding rounds of 70, 66, 74 and 71 on the Old Course at St Andrews. They returned to the 18th for a sudden death playoff that was quickly settled when Murphy holed for birdie from 25 feet.

A magical weekend for the Cork teenager included a stunning second round of 66 on the Old Course that moved him into contention. The 19-year-old began Sunday’s 36-hole finale with a third round 71 but de Bruyn produced back-to-back rounds of 68 to lead in the clubhouse.

Murphy set out from eight under in the final round and quickly reached double figures with birdies at the third and the fourth. He remained at 10 under until the 13th where he dropped his only shot of the round. He needed to pick up one more shot to move clear of du Bruyn but a birdie eluded him over the closing stretch.

At the first extra hole of their sudden death playoff, Murphy pounced. His birdie putt found the cup and with it came the biggest prize of his short career. His previous wins include the Leinster Students, Munster Students and Munster Boys (2016). A student at the University of Louisville in Kentucky, the Cork native joins an illustrious list of winners at the St Andrews Links Trophy. And he becomes the third Irish player to triumph after Rathmore’s Alan Dunbar (2009) and Naas’ Conor O’Rourke (2016).

Eddie McCormack captured the Connacht Stroke Play Championship on Sunday as the 45 year old carded a level par final round to win by two strokes from Sean Flanagan on a five under par mark.

The former Ireland international holed a clutch birdie putt on the penultimate hole after his second to the par five 17th found trouble and his recovery shot ran through the green. This gave him the luxury of a two-stroke lead standing on the par-three 18th tee. A sublime tee-shot to eight ft allowed McCormack a relaxed stroll on to the green, taking two putts for the win.

The Galway Bay member opened his account on Saturday with two rounds of 70. His third round on Sunday morning included birdies on the eighth and ninth but were quickly wiped out by consecutive bogies on the next three holes. McCormack steadied himself and with birdies on the 14th and 16th he went into the final round with a three shot lead.

Power’s reward for finishing second at the East is 160 order of merit points, which moves him ahead of Mallow’s James Sugrue. And the two-time Irish Boys champion is now just 45 points outside the top three.

Now that he has risen to fourth in the Bridgestone race, Power is pushing for a place in the Ireland men’s team for this year’s Home Internationals. Power turns 18 this month and is still eligible to play at boys level but he can secure his first senior cap by finishing in the top two on the Bridgestone Order of Merit.

Lahinch, the venue for next year’s Dubai Duty Free Irish Open will see some top class action next month when the Co Clare links hosts the 117th South of Ireland Amateur Open Championship.

Scheduled for 25-29th July, 150 of Ireland’s leading amateurs will play in the 36-hole strokeplay qualifier with the top 64 qualifying for the matchplay stages from Friday 27th July.

The semi-finals and final are scheduled for Sunday, 29th July with Tipperary town based Pierse Motors Volkswagen sponsoring what is Ireland’s oldest provincial championship for the third year running.

Kevin O’Keeffe, captain of Lahinch Golf Club, said: “The South of Ireland continues to be one of the most popular championships amongst our leading amateurs.

“Last year, 10 of the victorious Irish men’s team played in the South of Ireland. Lahinch Golf Club is appreciative of the support of the Golfing Union of Ireland in ensuring that our leading golfers have the opportunity to follow in the footsteps of previous winners such as John Burke, JB Carr, Paul McGinley, Darren Clarke and Graeme McDowell.

“Played mid-summer at peak holiday time in Lahinch, The South is generally regarded as the most enjoyable of the amateur ‘majors’ with large crowds guaranteed while golf is the talk of the village throughout the week.

“Lahinch and the surrounding area is gearing up for another memorable five days of golf, and all visitors are welcome to come along and join in the festivities.”

The closing date for entries is midnight on Wednesday June 27th.

Carlos de Corral successfully defended the European Mid-Amateur Championship in Bulgaria. The Spaniard, who claimed a three-stroke victory on home soil last year, had to play extra holes this year to secure the title.

After rounds of 70 and 72 Corral fired a final round 69 (-3) to earn himself a playoff with Germany’s Michael Thannhäuser. Steffen Alvang and leader after day two, Henrik Henningsson, finished on four-under-par, missing out on the playoff by a shot.

Alvang was awarded the bronze on countback, his final round 69 trumping Henningsson’s 72.

The playoff took place on BlackSeaRama’s signature par-3 18th hole, which measures 210 metres and is perched on the edge of a cliff overlooking the Black Sea.

On the first playoff hole, both players made par so it was back to the tee again.

The second time round, de Corral made par while Thannhäuser bogeyed, which decided the championship in favour of the Spaniard.

Damian Mooney shot rounds of 64 and a six under par 62 to win the Dunfanaghy Pro-Am by three shots from David Higgins. Mooney and 2017 champion Higgins were locked together after opening with four-under 64s in the first round.

But the 50-year-old from Belfast stepped up the pace on day two, reaching the turn in three under par 30 before coming home in 32 to sign for a two-round total of 10-under par 126.

Higgins finished alone in second on seven under par following a second round 65 with North West’s Brian McElhinney and Limerick’s Tim Rice tied for third on six-under par.