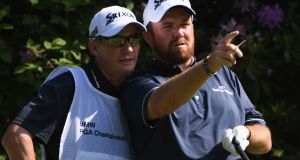 Shane Lowry and his caddie on the seventh hole during day one of the BMW PGA Championship at Wentworth. Photograph: Ross Kinnaird/Getty Images

For anyone cursing late, dropped shots on the 18th hole here on the West Course, where a wicked pin placement brought the water hazard into play, perspective was waiting not too far away: as players emerged from the recorder’s cabin after fulfilling their duties of signing scorecards, a young man in a wheelchair waited for any acknowledgement. Most players nodded, some waved.

Shane Lowry – who’d just signed for a 68 in the first round of the BMW PGA Championship – went the extra yard. Lowry moved with all the swiftness of a corner forward claiming a carefully weighted inside pass to lean beside the man as a photograph was taken, and then whipped his glove from his back pocket, autographed it, and said a few words before offering it to the man and only then moving away.

Through it all, Lowry had a smile on his face. And why not? Perspective is important; and, on a beautifully sunny day in the stockbroker belt outside London, it was a day which confirmed that the Offalyman’s season was ready to finally, if somewhat belatedly, click into gear.

Although Sweden’s Johan Carlsson – a 6-feet 5-inch giant of a man with flowing locks not unlike those you’d imagine the Vikings of old once boasted – manoeuvred into pole position with a six-under 66 on the Burma Road, his first time ever to hold an outright lead, there were those not too far adrift who could face into the rest of the tournament with great anticipation. Lowry was one of them.

Carlsson claimed the overnight lead, one shot clear of Francesco Molinari, Kiradech Aphibarnrat and Scott Jamieson after they posted 69s. Behind them, a bunch of nine players – among them British Open champion Henrik Stenson and an invigorated Lowry – gathered, ready to give chase for a title worth a €1 million payday on the remodelled course.

Indeed, Ernie Els – whose design team have received near unanimous kudos for the latest makeover – showed his appreciation for the rules of the sport when giving himself a two-shot penalty. On the 12th hole, those spectators gathered around the green roared mightily for what they believed was a hole-out for eagle from a greenside trap. But Els was unhappy with how he had replaced the plugged ball which he’d been permitted to check, and self-imposed the penalty strokes. “I wouldn’t be able to live with myself,” he said.

The Irish contingent – reduced to six after Paul McGinley withdrew with a back injury, which confined him to a broadcasting role – had mixed performances, although Paul Dunne, in the penultimate group, performed well in joining Lowry with a sub-par score.

The Greystones player manufactured a fine birdie on the 17th, after a wayward drive following on a three-putt bogey on 16, to sign for a 71, one under. That late birdie was a measure of Dunne’s creativity and fortitude. “Eyes closed, head down, hit it hard,” he later observed of the four-iron recovery through the trees back to the fairway that set up a three-quarter wedge shot to 10 feet for the birdie.

“This is a big week, a lot of money and a lot of points in the Race to Dubai but you have got to play what’s in front of you, you can’t really think about that. I’m aware of it, everyone’s aware of it. It is more an exciting awareness rather than nervous,” said Dunne.

And Pádraig Harrington, absent from tour for the past two months following spinal surgery, returned to the fray. For sure, there was an element of rustiness, with doubts creeping in over putts in particular, but he recovered from a double-bogey seven on the 17th where he hit his tee shot out-of-bounds to birdie the last for a 73, one over.

“There’s no substitute for having a card in your hand,” admitted Harrington, content at least that speed and power has returned to his game following the surgery and recuperation, although he has taken to travelling with an upper neck cervical traction device as part on his on-going recovery programme.

For Lowry, it seems that the West Course – in whatever form – has an effect on him. With three top-six finishes here since 2011, it is a course that brings a smile and a swagger back. “I love being here, I love the tournament,” admitted Lowry, who overcame back-to-back bogeys on the eighth and ninth holes to cover the back nine in 32 strokes with four birdies.

“I said to my caddie [Dermot Byrne] walking off the last green, if we could play here every week I would be happy,” said Lowry, who is without a top-10 on tour since his runner-up finish to Dustin Johnson in last year’s US Open. “I feel like I’m doing everything I can to play good golf and that’s all I can do. I’m going out every day on the golf course and every day on the range and giving it my best and that’s all I can do.”

There was much to admire in Lowry’s homeward run, with birdies on the 10th – a seven-iron approach to 15 feet – and the 11th – a wedge to six-feet, and then the par-five 12th where he lay up and hit a wedge to three feet. It could have been even better with a lip out on the 13th depriving him of four-in-a-row.

Lowry completed his round with a birdie on the 18th, a five-wood approach from 242 yards – “a perfect number,” he claimed – set up a finish that had that spring back in his step. Onwards and upwards, as the man himself would put it.