Rory McIlroy gets Match Play challenge back up and running 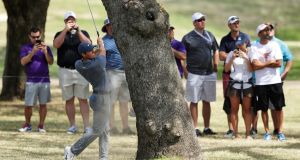 Rory McIlroy plays his second shot on the first hole in his match against Jhonattan Vegas at the WGC-Dell Match Play at Austin Country Club in Texas. Photograph: Richard Heathcote/Getty Images

Rory McIlroy resurrected his interest in the $10 million WGC Dell Match Play championship at Austin Country Club, Texas, with a 2&1 win over Jhonnattan Vegas in his second group match, a win that enabled him to breathe new life into his quest to lift the title.

“At least I still have a chance to get through to the weekend,” admitted McIlroy after keeping his hopes alive, admitting to being “a bit flat” in his opening defeat to Peter Uihlein.

A day after losing out to Uihlein, McIlroy’s win over Venezuelan Vegas combined with Uihlein’s loss to Brian Harman keeps the group wide open with three players in Group 6 entertaining hopes of moving on to the knockout phase as group winner: Harman has one and a half points, McIlroy and Uihlein have one point apiece with only Vegas, on a half-point, ruled out of the equation when it comes to advancing.

If there is a tie in any of the groups at the conclusion of the round-robin phase, then the players go into sudden-death playoffs to decide who advances to the last 16.

“I need to win [against Harman] and that will at least get me into a playoff to try to get through, obviously depending on how Peter and Jhonny’s match goes. At least [I] sort of brought things back into my own hands, which is nice . . . but that’s the beauty of this group play. Some years it works in your favour, like this year, and some years it doesn’t, like last. I played a match on Friday [last year] that was basically meaningless. It’s nice to still have something to play for,” said McIlroy.

McIlroy was very much in control against Vegas, a three-time winner on the PGA Tour. In fact, he never trailed. Once he moved one-up with a winning par on the eighth hole, the Northern Irishman – winner of the Arnold Palmer Invitational last Sunday which ended a near-18 month winning drought on tour – tightened his grip and a 13-footer for birdie on the ninth meant he turned two-up.

On the par-four 13th, McIlroy’s approach from 45 yards finished a matter of inches from the cup and he tapped in the birdie putt to move three holes up on his opponent. However, his bid to close out the match on the par-five 15th was undone when he failed to get up-and-down from greenside rough to match Vegas’s birdie.

McIlroy found it tough to close the deal. On the par-three 17th, his tee shot missed right of the green. “Don’t stop there,” he shouted in disbelief as his ball refused to kick onto the green. But when Vegas missed his 18 footer for birdie, McIlroy – having putted eight feet by the hole – safely rolled in the return putt for a winning par to win the match and keep alive his interest with a final group match against Harman.

“I’ve always loved the match play. I like the format, whether it’s the group stages, whether it’s pure knock off. I’ve always enjoyed it; and it would be great to play the weekend here and get a run,” added McIlroy.

Ian Poulter, a former winner back in 2010, once again demonstrated his love of the match play format. A winner over Tommy Fleetwood on Wednesday, the Englishman took control of his group with a 2&1 win over American Daniel Berger. “I like match play, let’s just put it like that. I don’t know how else to explain it. I absolutely hate losing with a passion. In fact it makes me want to vomit. That’s it, plain and simple in a nutshell!” said Poulter, who next has Kevin Chappell in his sights.

Bubba Watson took a strong grip on Group 11 with his second win of the round-robin, this time a 3&2 effort over Marc Leishman while Texans Jordan Spieth and Patrick Reed – both with two wins from two – will go head-to-head to decide who advances from Group 4.

For world number one Dustin Johnson, though, his title defence ended with a whimper as he lost a second straight match. Having come out on the wrong side of a reverse to Bernd Wiesberger in the opening series of matches, Johnson was beaten 4&3 by Canadian Adam Hadwin.

1 Sideline Cut: Vignette shows why Bird is the true shark in The Last Dance
2 Sonia O’Sullivan: How to keep your competitive edge from going blunt
3 New signings eligible to play for Pro 14 clubs from July 1st
4 Coming fourth in the Olympics didn’t change this fearless quartet, time did
5 Philip Browne admits funding model for Irish rugby is not sustainable
Real news has value SUBSCRIBE