Pete Uihlein brings Rory McIlroy back to earth in Austin 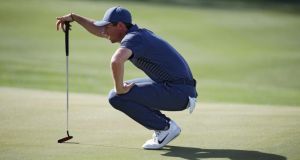 Rory McIlroy was beaten 2 and 1 by Pete Uihlein in his Match Play opener in Texas. Photograph: Gregory Shamus/Getty

An out-of-sorts Rory McIlroy, just days after claiming the Arnold Palmer Invitational title, came crashing back down to earth in the $10 million WGC-Dell Technologies Match Play Championship at Austin Country Club where American Pete Uihlein fashioned a 2 and 1 win over the Northern Irishman in the first group round-robin match.

McIlroy, ranked seventh in the world, fell to Uihlein, ranked 63rd, although - with his back against the wall - reserved his best ‘til late on, only to run out of holes.

Playing in his last tournament before the upcoming US Masters where he will seek to claim the last leg of the career Grand Slam, McIlroy failed to replicate his stunning play of that final round at Bay Hill when he birdied five of the final six holes to claim victory.

On this occasion, McIlroy couldn’t buy a putt for his life until it was too late. The putter, so obedient on Sunday, misbehaved to the extent that McIlroy failed to find a birdie until the Par 5 12th, which he only halved, and at which point he was already five down to Uihlein. Again, on the 13th, where he managed another birdie, it was only sufficient for a half.

McIlroy found himself on the back foot from the start. Uihlein’s eight-footer for birdie on the second put him one up, a position that increasingly grew stronger and stronger as the round progressed. Two- up after four; three-up after five, four-up after nine, and five-up after 10. It was one-way traffic for the most part, as McIlroy struggled to get any momentum until the final stretch of holes.

And when he did get those back-to-back birdies on the 12th and 13th, they were matched by his opponent. Until the 14th, where McIlroy’s third successive birdie, putting from off the green, finally - if a bit belatedly - won him a hole to reduce the margin to four-down. And a fourth successive birdie on the 15th for McIlroy kept the match alive, reducing the deficit to three holes.

McIlroy then rolled off his fifth successive birdie on the 16th to reduce the margin to two, only to finally give way to Uihlein on the Par 3 17th where both players parred to half the hole and Uihlein was eventually able to breath a sigh of relief.

Afterwards, McIlroy admitted to being “a little flat” in his opening match: “I didn’t really necessarily play badly. He played pretty well. He was a few under through nine and he didn’t make a bogey all day. So it was hard to claw my way back.

“It was gusty out there; the conditions were a little tricky. I made a run at him at the end but it was a little too late.”

For McIlroy to keep alive any hopes of progressing out of the group, he will need to beat Venezuela’s Jhonnatan Vegas in his second group match.

Ian Poulter embellished his reputation as a matchplayer, taking the scalp of Tommy Fleetwood, last year’s European Tour number one. Poulter inflicted a 3 and 2 defeat on Fleetwood, getting off to a great start - winning the first hole - and two-up through five only to be all-square after eight holes. However, Poulter moved up the gears on the back nine and closed the match with winning birdies on 12 and 15 to move clear.

“Winning match play is always really pleasing. Tommy is a great player. I don’t think either of us really holed any putts. I think I probably played just a little better than he did and obviously got it done. Yeah, it’s nice.

“The simplicity of match play is win your match. It sounds really easy and it’s not, so level of focus, level of concentration this week (is the key); be super aggressive, try not to hand too many holes away,” said Poulter of his winning start.

Another surprise was delivered by Austrian Berd Wiesberger, who was a one hole winner over defending champion and world number one Dustin Johnson.

Johnson struggled to get any flow to his game. “He had a couple of off-shots,” conceded Wiesberger, who saw the world number one hit his tee shot on the third into the water hazard and also hit two shots out of bounds.

“Quite unusual for him,” said the Austrian of his opponent’s plight, adding: “He’s not the No. 1 player in the world for nothing. That back nine suits him and I saw him play well last year and winning this championship. So I knew I had to play well. I still didn’t play great but somehow managed to get it through and just happy with that.”