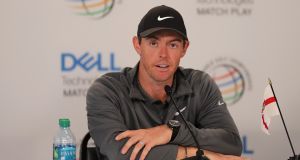 Rory McIlroy speaks to the media after a practice round ahead of the WGC Dell Technologies Matchplay at Austin Country Club. Photo: Richard Heathcote/Getty Images

Rory McIlroy has admitted Sunday’s long-awaited victory at the Arnold Palmer Invitational supplied the “validation” he can draw upon ahead of another Masters tilt. McIlroy, who returns to action at the WGC Match Play on Wednesday, closed with a stunning 64 to prevail at Bay Hill. The success was timely; the Northern Irishman’s next start after this comes in the one major still to elude his grasp.

“I have even more optimism now,” McIlroy said. “It was just more validation that what I’ve been doing has been correct. It all sort of just came together.

“There was validation and optimism that I can go ahead and do this more often. I feel like I’ve crossed that line that I needed to. I hadn’t won in the past 18 months. I’m optimistic not just the next few weeks but the whole season. It’s great to get a win early. I’ve got all that great stuff to fall back on, how I handled Sunday.

Much was made of the influence of a putting lesson McIlroy had earlier in the week from former Ryder Cup player Brad Faxon, but Everton forward Wayne Rooney also inadvertently played a part in his best putting performance on the PGA Tour.

“We were talking about different sports and he (Faxon) was talking about a free-throw shooter in basketball,” McIlroy told a pre-tournament press conference ahead of the WGC-Dell Technologies Match Play in Austin.

“We were talking about triggers, about how do you start your putting stroke. Everyone has different ways and I said Wayne Rooney before he takes a free-kick or a penalty he taps his toe on the ground before he actually starts his run-up. I noticed it when I shot a Nike commercial with him a few years ago.”

His immediate post-tournament feeling was of fatigue, as endorsed by McIlroy’s Sunday celebrations. “Two glasses of wine and a big bowl of ice cream,” he recalled. “That was it. I watched the highlights but fell asleep.”

McIlroy denied that silencing detractors during his injury-triggered slide to No 13 in the world had been uppermost in his thoughts. “I don’t care because people don’t know the full story,” added the 28-year-old. “They make comments and they speculate but they don’t have the facts 100 per cent so they never really know. It’s all speculation.

“So, no, I’m not in this game to prove people wrong. I’m here to win. I learned a long time ago I can’t please everyone. There’s going to be people that like how you do things, don’t like how you do things and I can’t change their opinion, so I just have to go and do the best that I can. And hopefully when I do try my best and do my best, I’m able to produce results like you saw on Sunday.”

McIlroy has Peter Uihlein, Brian Harman and Jhonattan Vegas for company in the group section of the Match Play. The four-times major champion faces Uilhein on Wednesday.

Jordan Spieth, who will also compete in Austin, believes McIlroy’s return to form was inevitable. “Whether he won last week or not, he’s always a force,” said the Open champion. “He just needs to be healthy. And I think most of last season, it was a struggle for him because he knew that he couldn’t have the ball count that he wanted to be at his best yet he was still playing.

“So just being rested, healthy and on the right path meant this year and going forward Rory is Rory. And so he should always be a favourite at any event.”

Ian Poulter has turned to the putter he used in the 2012 Ryder Cup as he attempts to secure a Masters berth. The Englishman, who starts this week outside the world’s top 50 and therefore not eligible for the first major of the year, will need to get to the quarter finals at least to book what would be a 13th Augusta appearance. Poulter faces Tommy Fleetwood in what is arguably the pick of the day one ties here.

“I don’t want to miss the Masters … because I know I’m playing well enough,” Poulter said. “I’m still hopeful of being there. On paper it’s simple what I have to do. I’ve set myself the target of at least winning five games in a row.” – Guardian service

1 James Ryan injury could open the door for Ryan Baird
2 Ken Early: Frank Lampard’s problems start at number one
3 Shane Lowry finds some welcome form as US PGA looms
4 Derry City get back up and running at Richmond Park
5 Lockdown hiatus may afford way back for Waterford hopefuls
Real news has value SUBSCRIBE