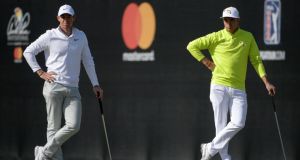 Rory McIlroy and Rickie Fowler wait to putt on the 17th green during the second round of the Arnold Palmer Invitational golf tournament. Photo: Phelan M. Ebenhack/AP Photo

US golf fans, a group known for expressing their feelings, are beginning to grate on Rory McIlroy. The world No13 was subjected to heckles during Saturday’s third round at the Arnold Palmer Invitational and wondered whether limiting alcohol sales could remedy the matter.

“There was one guy out there who kept yelling my wife’s name,” said McIlroy, who was two shots off the leader Henrik Stenson going into Sunday’s final round. “I was going to go over and have a chat with him. I don’t know, I think it’s gotten a little much, to be honest. I think that they need to limit alcohol sales on the course, or they need to do something because every week, it seems like guys are complaining about it more and more.”

McIlroy is not the only golfer to have complained about hecklers recently. In February’s Honda Classic Justin Thomas had a spectator who shouted for his ball to land in the bunker removed.

Idiot fan: “Get in the bunker.”@JustinThomas34: “Who said that? Are you kidding? You just said for that ball to get in the bunker. Was that you? Enjoy your day, buddy. You’re gone.”

“I don’t want to kick someone out just to kick them out. It’s just so inappropriate. We’re out here trying to win a golf tournament,” said Thomas, who went on to win the tournament.

“I know that people want to come and enjoy themselves, and I’m all for that, but it’s when the comments get personal and people get a little bit rowdy it can get a little much,” added McIlroy on Saturday. “It used to be you bring beers on the course but not liquor. And now it seems like everyone’s walking around with a cocktail. So I don’t know if it’s just go back to people walking around with beers in their hand, that’s fine, but I don’t know.”

Last month, McIlroy commented on the raucous support for Tiger Woods and the effect it has on the American. “It’s tiring. I need a couple Advil. I’ve got a headache after all that,” said McIlroy. – Guardian service