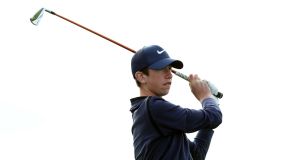 The Golfing Union of Ireland will run a qualification series to decide Ireland’s representative at this year’s Youth Olympic Games.

Players can earn points at five events during the first half of the season. The leading scorer wins a ticket to the Games, which take place in Buenos Aires, Argentina from October 6-18th. Players born between January 1st 2000 and December 31st 2003 are eligible to compete.

Maynooth University made it a clean sweep at the Irish Colleges Matchplay Series at Woodbrook. Played through three nine-hole series -two in matchplay before a final shootout involving the leading six teams - it was Maynooth C that claimed the bragging rights.

The pairings of Éanna Griffin and Caolan Rafferty, and Mary Doyle and Molly Dowling were a combined level par on their foursomes cards for the final series with Rafferty and Griffin’s two-under par effort for the final nine enough to clinch the title on a countback of the best cards.

That was just enough to pip Maynooth A - TJ Ford and Harry Gilivan, and David Brady and Cian Feeney - who had also combined to win the inaugural Irish Students Sixes Tournament, a six-hole blitz format consisting of six series of matches played over two days, at The Heath last month.

With shorter forms of competition golf being encouraged at club level by the R&A the ILGU and GUI, the six-hole and nine-hole formats in Colleges golf have showcased how competitive these formats can be.

Trinity College, the defending champions, made a gallant defence of their title, fighting through to the final shootout before finishing sixth behind Colaiste Stiofain Naofa and DCU (b).

McKibbin takes the honours in Florida

Holywood’s Tom McKibbin won the inaugural Nick Faldo-run Major Champions Invitational at Bella Collina in Florida. The Irish Boys international opened with a four-under 68 before making a hole-in-one at the 16th in a second-round 67 to go into the final round tied for second, one stroke behind American Akshay Bhatia.

An eagle two at the sixth and a birdie at the ninth saw him move to the top of the leaderboard in the final round before mixing two birdies with two bogeys on the back nine for a 69 and a one-shot win over American Julian Perico Ibaicena on 12-under par.

Lurgan’s Annabel Wilson was 15th in the girls’ event on six-over par after rounds of 76, 75 and 71. Mexico’s Corey Lopez won by two strokes on 15-under par from Sweden’s Linn Grant.

McKibbin is set to tee it up on an Irish Boys team in a match with France later this month before heading to South Carolina to play in the Sage Valley Invitational - a Masters-style junior event played close to Augusta - from April 19th-21st.

Shannon Burke from Ballinrobe is in pole position on the ILGU Scratch Cup Circuit having won the Carlow Scratch Cup by four shots last week. The University of Ulster student, carded rounds of 76 and 74 in wet conditions to finish comfortably ahead Lauren Walsh (Castlewarden).

In a new venture for 2018, all scratch cups within the circuit have been paired for WAGR (World Ranking) purposes. The next stop on the circuit was due at Woodbrook over the weekend but was cancelled because of the inclement weather.

The R&A is continuing its commitment to increase participation in golf among women and girls by providing funding to support the appointment of new development managers in Australia, England, Ireland, Scotland and Wales.

Working with its affiliates around the world to enhance golf’s appeal, the investment forms part of the governing body’s drive to encourage more women, girls and families to play golf more regularly across the globe and to go on to become members of golf clubs.

An initial three-year funding package of £75,000 per nation, has been agreed between The R&A, Golf Australia, England Golf, the Golfing Union of Ireland/the Irish Ladies’ Golf Union, Scottish Golf and Wales Golf for the recruitment and appointment of experienced sports development staff.

The appointees will all work in partnership with golf’s various stakeholders to deliver innovative solutions and inspiring campaigns to boost participation, at a time in which more women are seeking an active lifestyle for both themselves and their families.

International Maria Dunne has taken up the post in Ireland. Having decided to finish her International career at the end of 2017, the opportunity arose to join the Confederation of Golf in Ireland team. Already a Golf4Girls4Life Ambassador Dunne is embracing the idea of working to develop the game; “To be a role model in any phase of your life is really special, I appreciated so much being asked to be an ambassador as I know how role models have inspired me over the years. I look forward to now being involved for such an exciting time for the development of women’s and girls’ golf.”

The Golfing Union of Ireland have called up 16 boys for international duty as the season gets underway with away matches against France and Wales. AIG Irish Close runner-up from 2017 David Kitt is among the players making the trip to France alongside John Brady who was the leading under-17 player in the Irish Boys Championship last year.

Having been promoted from the under-16 panel this season, Tom McKibbin, Aaron Marshall and Luke O’Neill are also included in the squad that will be accompanied on the trip by Irish Boys Captain Alasdair Gibson and Provincial Lead Coach Fred Twomey for the two-day match against the French at Terre Blanche on March 22nd-23rd.

In Cardigan, another eight-member squad will play Wales over two days (March 24-25th) in the annual Cardigan Cup encounter. Irish Boys Under 16 Champion Adam Smith from Mullingar and last season’s runner-up in the Under 16 Order of Merit Clandeboye’s Scott Miller are part of the team to take on the Welsh.

St Augustine’s from Dungarvan claimed the first Munster Pennant of 2018 when they won the Irish Schools Senior Championship Munster Final in Monkstown. They beat Christian Brothers Cork after a long and tense final which turned out to be a great matchplay contest. Christians had overcome Patrician Academy in their semi-final while St Augustine’s got the better of Crescent College. After a long afternoon of golf in the cold spring sunshine, it looked as if the Dungarvan school would win but Christians battled on to force the match to the deciding game. With the match tied at 2-2, it all came down to the final match. St Augustine’s Sean Lenihan made a great comeback in the last three holes to help St Augustine’s to the first Munster Golf title of the 2018. The Gold Coast golfer had to win the 17th in Monkstown to tie his match and he went on to win the 18th thanks to a great approach and a solid first putt.

Olivia Mehaffey has been named in the International team that will take on the USA in the expanded Arnold Palmer Cup at Evian Resort Golf Club in France from July 6-8th.

It will be the first edition of the event staged using the expanded format of United States men’s and women’s collegiate golfers - 12 men and 12 women on each side - versus their counterparts from around the world.

Fredrik Nilehn of Texas Tech and Sweden and Arkansas golfer Maria Fassi from Mexico, who topped the Arnold Palmer Cup rankings, are the leading players in the International team.

More representatives from Irish golf could join Mehaffey with the winners of the men’s and women’s events at the R&A Foundation Scholars Tournament, scheduled for April 2nd-3rd, qualifying for the team.

Solskjaer requires more than Sancho to mount a title tilt 21:46
No fans, no problem as far as Tiger Woods is concerned in San Francisco 21:29
Second Waterford FC player to undergo testing after reporting Covid-19 symptoms 21:15
Crowd limits to remain at 200 as Government stalls move to phase four 21:15
Ryan Brennan secures the points for 10-man Shelbourne in Donegal 20:18
Here is your handy guide to sport on television this week