‘I’ve played a lot more golf and overall I feel like I’ve made some nice changes. I feel good’ 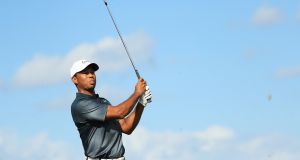 Tiger Woods declared it was all systems go after sneaking in nine quick holes at Torrey Pines on Tuesday, two days ahead of his official PGA Tour comeback at the Farmers Insurance Open.

On a sparkling winter morning in southern California, with not a cloud in the sky and barely a ripple on the Pacific Ocean, Woods showed he is still an early bird when he teed off shortly after the sun had risen over the Laguna Mountains.

He played the back nine on the South Course and was finished by 9.30am.

Woods did not speak to reporters after his round, but had a quick word with ESPN while he was playing. He was confident that his game – and body – was heading in the right direction.

“You have to beat balls for a little bit of time to build up your endurance and muscles. I feel like I’ve done that and now it’s time to play a tournament,” he said.

Woods, who has barely played in three years due to a serious back injury, returned after a 10-month absence when he took part in the unofficial Hero World Challenge, finishing a respectable ninth out of 18 players and swinging with apparent freedom.

“I’ve had a little more time to get ready for this event,” he said. “I’ve played a lot more golf and overall I feel like I’ve made some nice changes. I feel good.”

He hardly needs a practice round at Torrey Pines to know his way around. He has won on eight occasions here, seven times at the PGA Tour event and most notably at the 2008 US Open.

That 14th Major title was perhaps his greatest achievement, coming as it did as he carried multiple leg injuries.

Few thought at the time that nearly 10 years later he would not have added to his Major haul.

The US Open was played on Torrey Pines’ South Course, while the Farmers uses the South for three rounds while one round is contested on the easier North Course.

Two years ago Woods gingerly limped off the course after playing just 11 holes of the first round, a week after shooting a career-worst 82 at the Phoenix Open.

He returned last year but missed the cut, before playing one round at the European Tour’s Dubai Desert Classic and withdrawing due to back spasms.

Soon afterwards, with multiple microdiscectomy surgeries seemingly having failed, Woods decided to have a spinal fusion operation last April in an attempt to reduce his searing back pain and allow him to play golf again.

He will get a look at the North Course on Wednesday in the pro-am.

Woods has won 79 times on the PGA Tour, second only to Sam Snead’s 82.