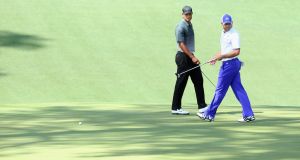 Tiger Woods and Sergio Garcia during the third round of the 2015 Masters Tournament at Augusta National Golf Club. Photograph: Andrew Redington/Getty Images

Sergio Garcia, who has endured a turbulent relationship with Tiger Woods for years, has suggested people should think twice before making bold claims about the 14-times Major champion’s return to the competitive fold. Garcia believes there is a “big question mark” over whether Woods can cope once more with tournament golf.

Woods will play in this week’s Farmers Insurance Open in California, his first regular tour event for a year amid ongoing back troubles. Woods did perform admirably in December’s Hero Wold Challenge and a string of players have spoken effusively about the 42-year-old’s future. Garcia is less certain.

Garcia did, however, endorse the wider benefit of a fit and functioning Woods. “He’s done so much for the game,” the Spaniard added. “If he’s not there, will the game of golf fall apart? I don’t think so. But like I always say, the more sugar, the sweeter. So the more big-time players we have on tour, the better it is for the game globally and he’s obviously one of those.”

Woods, who has won eight times at the Torrey Pines venue he will take on this week, is confident. “I’ve had a little more time to get ready for this event,” he said. “I’ve played a lot more golf and overall I feel like I’ve made some nice changes.”– Guardian