Out of bounds: Tiger and Rory make welcome returns but injuries on the rise 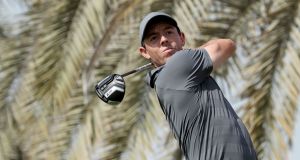 Is it time to pop the champagne corks? After all, this has been a good couple of weeks for golf, what with Rory McIlroy returning last week in Abu Dhabi and, potentially of even greater significance given the length of his layoff, Tiger Woods resuming real competitive duty at the Farmers Insurance in San Diego.

But maybe we should hold off on celebrating too much too soon, for the underlying concern for modern day professional is the frequency with which the top players are getting injured and being forced into long rehabilitation breaks from the sport.

It’s not just Messrs McIlroy and Woods who have had their problems with pain.

The latest addition to the casualty list is Brooks Koepka (out of action for 10 weeks due to a partial tear of a tendon in his wrist), whilst others to endure spells on the sideline in recent seasons include Jason Day, Louis Oosthuizen, Justin Rose, Dustin Johnson, Paul Casey. There are lots more, all of which just shows that, although golf is a non-contact sport, there is an increased trend towards players suffering injuries.

Which raises the question, why?

Sure, players of past vintages got injured; but not to the extent of the current crop. The irony is that the joke doing the rounds about golfers in the old days was that the only exercising that took place was in raising their arms to order a drink at the bar. Nowadays, players are more likely to be found in the gym, pumping iron, building up their muscle mass.

It was at the Memorial tournament last year - one which he hosts - that Jack Nicklaus wondered aloud about the propensity for modern players to get injured, and also pondered on any ability to actually play through the pain barrier.

Times have changed though since the Golden Bear’s reign, not just in attitude. Unquestionably, players are swinging harder at the ball and that quest for power is a factor in the increased injury list. The average handicap male golfer has a clubhead speed of around 90 miles per hour; in contrast, the fast swingers on tour - the McIlroys, DJs, Bubbas, Woods’, Sergios et al - all have average clubhead speeds in excess of 120 miles per hour.

One man who has spoken some sense on players’ quests for more power in the swing has been Phil Mickelson, who has said the best way to prevent back problems was not through workouts but through adopting a “long swing with passive wrists and light grip pressure” which increases the emphasis on rotating the hands around the body rather than relying on back and shoulder muscles.

That Mickelson of his generation is a player who avoided the serious back injuries that befell so many of his peers would indicate that he has a valid theory. But it is unlikely his fellow professionals will listen to him; rather, the desire for ever greater power games will ensure a steady queue into the gym. And perhaps further back injuries?

1 Ireland 23 Georgia 10: How the Irish players rated
2 Sordid murder of hurling brothers still resonates in south Galway
3 It’s shocking how men have driven women away from exercising in public
4 Ireland’s autumn of discontent continues with abysmal Georgia showing
5 Nicky English: No surprise that Limerick and Waterford in final
Real news has value SUBSCRIBE

It’s shocking how men have driven women away from exercising in public 06:00
Dogged Armagh fail to stop Dublin claiming place in final 06:00
Ken Early: Maradona’s wonder goal a monument to lost freedom 06:00
‘It wasn’t down to anything dramatic I said . . . It was down to the players’ 06:00
Five academy players in Munster squad to take on Zebre 06:00
Here is your handy guide to sport on television this week