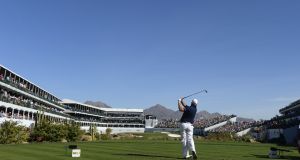 Shane Lowry of Ireland watches his tee shot on the 16th hole during the first round of the Waste Management Phoenix Open at TPC Scottsdale. Photo: Robert Laberge/Getty Images

Bill Haas found his long lost putting touch and rode his luck for a two-stroke lead in the opening round at the Waste Management Phoenix Open in Arizona on Thursday.

On a day when Rickie Fowler was heckled by the raucous gallery, and Player of the Year Justin Thomas had a late meltdown, Haas “got lucky” on the greens as he recorded a seven-under-par 64 at TPC Scottsdale.

Meanwhile, Shane Lowry was to rue a good round that got away . Starting at the 10th the Irishman notched up a birdie straight away before following it with another at the 13th. However, a costly double bogey at the following hole – despite the two subsequent birdies he made at the 15th and 16th – meant he went out in 34 but it could have been so much better. Two bogeys and a single birdie on the way in meant that he slipped further back, eventually signing for an opening round of 71, one under par, to sit six shots off the lead.

Leader Haas said afterwards that, “the putter was hot the first nine holes,” after a round that included a 30-foot birdie at the second hole, his 11th.

“I kind of hit a bad putt but it hit the back of the cup and went in,” he said.

“So one of those days where I could have easily three-putted that if it had run by, but it went in and saved two shots there basically.”

After starting the season with two missed cuts followed by a tie for 54th, Haas was not getting too carried away by his good start.

“This is only one round,” he said. “I’m not saying I’m cured (of recent putting woes) by any means.”

Fowler joined a group of four fellow Americans at five-under 66, with his lone bogey coming at the par-three 16th hole, which is famous for its rowdy fans who eschew usual golf etiquette by routinely booing bad shots.

But Fowler thought they went too far.

“I may be somewhat of a fan favorite, but they weren’t holding back,” he said.

“I was a little disappointed in some of the stuff that was said and I don’t want much negativity -- the normal boos for missing a green, that’s fine, but leave the heckling to a minimum and make it fun.”

Thomas also heard from the gallery when he ran up a double-bogey at the 16th, and he also made a mess of the par-four 17th, where he pitched his second shot from 50 yards over the green into a water hazard on his way to a bogey.

“Two birdie holes and to play those three-over today is definitely disappointing, but the fact that I did that and I’m still more than right there in a great position is definitely a positive note that I can leave today with,” he said after shooting a 68.

Thomas was also upset by the crowd, particularly a scream from a spectator during Jordan Spieth’s tee shot at the last.

“That girl just yelled right in Jordan’s down swing,” Thomas said. “I was so upset. It doesn’t matter who it is, whether it’s me or Jordan or anybody else in the field, I mean there’s just no place for that.”