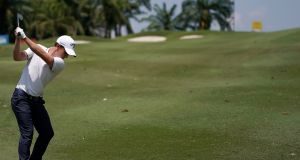 Chris Paisley of England plays a shot during day one of the 2018 Maybank Championship at Saujana Golf and Country Club in Kuala Lumpur, Malaysia. Photo: Stanley Chou/Getty Images

Chris Paisley has a Masters debut in his sights after continuing his stunning start to the season by setting the clubhouse target on day one of the Maybank Championship.

Paisley won his maiden European Tour title in the BMW SA Open three weeks ago and followed that up with fifth-place finishes in both Abu Dhabi and Dubai.

And the 31-year-old from Hexham carried on where he left off at Saujana Golf and Country Club in Kuala Lumpur with a bogey-free 65 giving him a one-shot lead over fellow Englishman David Horsey and France’s Mike Lorenzo-Vera.

Lone Irishman in the field, Darren Clarke, battled to an opening round of level par, 72.

Paisley was ranked 289th in the world at the end of 2017 but could move into the top 50 with a victory on Sunday. Staying inside the top 50 until March 26 would secure a first major championship appearance in the Masters at Augusta National.

“It was great and nice to keep the form going,” said Paisley, who is a combined 62 under par for 13 rounds of golf in 2018. “I just played really solid, hit it well off the tee so gave myself a lot of wedges and short irons into the greens and gave myself a lot of birdie chances. It couldn’t have gone better.

“Scoring wise it is quite easy but to keep your focus is quite difficult with how tiring the heat is, but it is good fun.”

Horsey carded six birdies and an eagle in his 66, with Lorenzo-Vera reaching six under par with two holes to play before play was suspended due to darkness following an earlier delay of one hour and 50 minutes due to the threat of lightning.

Last year’s runner-up David Lipsky and Andrew Johnston were among a six-strong group on five under, with defending champion Fabrizio Zanotti a shot further back alongside Ryder Cup captain Thomas Bjorn.

World number 12 Henrik Stenson is seven shots off the lead after an opening 72 matched by former Open champion Darren Clarke and Lee Westwood.

Former Masters champion Danny Willett fought back from carding five bogeys in succession on the front nine to card a two-over-par 74.