Leona Maguire notches up another record in budding career 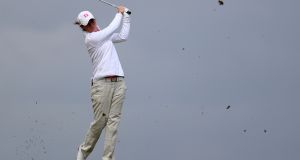 Leona Maguire has been at the top of the women’s amateur world golf rankings for 131 week. Photo: Matthew Lewis/Getty Images

Breaking records is becoming quite a habit for Ireland’s Leona Maguire as she continues her dominant college golf career in the US before turning professional.

However, her latest record could be the most historic of all given the fact that it may well never be broken.

When the latest women’s world amateur golf rankings were published on Wednesday Maguire was ranked number one for the 131st time in her career, breaking the previous record held by New Zealander Lydia Ko.

But this is where it gets interesting as Maguire is quite unusual in the women’s amateur game. At 23-year-old she is essentially a veteran of the circuit with most players turning pro before they have even reached their 20th birthday – previous record holder Ko, for instance, turned pro when she was just 16 in 2013 and has gone on to win two majors since. Due to the fact that players are turning pro at a younger and younger age all the time - meaning they don't spend too much time on the amateur circuit - Maguire’s 131-week record (which will only continue to extend) may well never be broken.

Maguire has had the chance to turn pro on a number of occasions, including after she won college player of the year in her first year at Duke University but she has turned it down each time, opting instead to finish her degree in psychology.

In both 2016 and 2017 she advanced to the final stage of LPGA Tour qualifying school but turned down the chance to play so that – in the event of her securing her card – she wouldn’t have to face the deicision on whether or not to leave the amateur ranks.

Last year the Cavan native claimed five wins on the US collegiate circuit and topped it off by taking the Annika Award for the best golfer of the year in American college women’s golf and in doing so became the only player ever to win the award twice. However, her biggest win came at the British Amateur Championship at Pyle & Kenfig which helped her to extend her lead at the summit of the rankings.

Maguire first held the top ranking from May 2015 to May 2016, a span of 52 weeks, until she was overtaken by American Hannah O’Sullivan for 12 weeks that summer. Maguire took the number one spot back in August 2016 and has held it for 79 consecutive weeks.

She will finish her degree in May and will then decide whether to remain amateur to play in her fourth Curtis Cup in June or to join the professional ranks where she will have status on the Symetra Tour – the secondary women’s circuit in America.