Shane Lowry hoping Wentworth will inspire a return to form 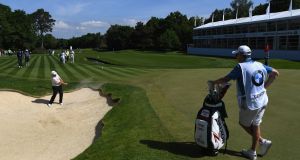 Shane Lowry has spent much of the season so far trying (unsuccessfully) to escape from the shadows.

Ironically, here he is at Wentworth seeking the shade of the trees as some protection from the sun’s rays as, on the eve of the PGA European Tour’s flagship championship. He ponders the question of how he can turn his season around.

As a catalyst for change, this BMW PGA Championship – with a beefed-up prize fund in excess of €6 million and the first instalment of the megabucks Rolex Series – would be a darn good time and place to belatedly kick-start a season which, so far, has failed to muster even a top-10 finish never mind a tournament win for Lowry. His best finish to date has been a tied-14th place finish on the PGA Tour at the Pebble Beach pro-am.

“It’s been nothing to write home about,” conceded Lowry of his season’s work. So far!

So, the answer, as it turns out, is one of hope. Little rays of light it would seem have found their way into Lowry’s levels of expectations.

“I feel I am playing alright. I’d be a little bit optimistic, although I’m just trying to play myself down and play my game and see where it takes me. Obviously, I love it around here,” said Lowry, whose disappointing campaign to date has seen him fall from 43rd to 76th in the official world rankings since the start of the year.

Lowry – one of seven Irish players in the field for a tournament title defended by European Ryder Cup player Chris Wood – is acutely aware his stop-start scheduling hasn’t helped in any way.

“I haven’t had a run yet to be honest, too many breaks, not playing enough . . . I need to play more frequently and need to play a little bit better when I do play as well,” he said.

However his results on the West Course, three top-six finishes in the past six years, would suggest this is a perfect time to flick on some kind of light switch.

Of the changes to the course – overseen by Ernie Els Golf Design, with input from Paul McGinley and Thomas Bjorn – that has seen the removal of some 29 bunkers and a softening of others which will enable players to attempt to reach the green from fairway traps, Lowry isn’t convinced it will reduce its overall difficulty.

“The changes are very subtle. I personally don’t think the golf course is going to play any easier,” said Lowry.

It was a point on which Justin Rose, so near yet so far in his quest for a green jacket at last month’s Masters where he ultimately fell to Sergio Garcia, concurred.

“There’s an option to go for the green out of the [fairway] bunkers. But you still have to flirt with the lip of the bunker, so they could tease people into making bigger mistakes,” said the Englishman, who like Lowry has flirted with getting his hands on this title. In Rose’s case, he has twice finished runner-up.

The bigger factor from the course changes will likely be in evidence on the greens where some of the severe slopes have been softened and the surfaces reseeded with a purer bent grass. Rose – and indeed Lowry – could benefit from the improved greens, as the putter is the one implement that makes or breaks their scorecards so often.

Even with the course tweaking, Henrik Stenson made the observation that it still retains “an old-style golf course [feel],” expanding: “It’s not maybe the target golf that you see [elsewhere]. It’s a combination with flighting the ball in and . . . a bit of bumping, a mixed bag of shots into the greens and off the tee.”

And, in truth, over the years it is a course which has invigorated some and exasperated others. In times past, it was one that certainly frustrated Pádraig Harrington but the Dubliner – absent from tournament play for almost two months since undergoing surgery for a disc replacement in his spine – resumes competitive action having completed his recuperation period.

On the back of the hoarding behind the horse-shoed grandstand on the 18th green, there is a large image of Rory McIlroy. Of course, the Northern Irishman didn’t actually make it to Wentworth – taking the advice of his medical people to prolong his recovery from his rib injury – which means there is a seven-strong Irish player challenge: Lowry and Harrington are joined by Paul Dunne, aiming to kick on from his runner-up finish in the Hassan Trophee last month and after spending time with his coach in the USA, Paul McGinley, Darren Clarke, Damien McGrane and Neil Ó Briain.

For Lowry – whose upcoming schedule includes next week’s Memorial tournament, followed by a run that takes in the US Open, the French Open and the Irish Open – it is a matter of igniting a slow season. Will he catch fire?

“I keep saying it every week, I’m playing alright. I didn’t do great at the Players [in Sawgrass] but I think my game is a lot better than the score was.”

Perhaps a return to a favourite haunt will facilitate a change in results.