Do we realise how good Leona Maguire might become?

Out of Bounds: Role models haven’t halted this period of decline in participation levels 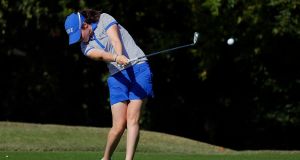 Time after time, Leona Maguire is providing us with hints of what awaits us down the line.

Without labouring the decline of participation levels contained in ESRI statistical analysis of golf participation report released on Monday, one aspect of that fall off in membership which really did surprise was how - in this golden generation for Ireland in terms of the Majors, with nine titles annexed by four players in the past decade since Pádraig Harrington made the breakthrough in 2007 - role models have apparently had so little impression in attracting young players into the sport.

Perhaps we over-emphasis the role played by such players, but I’d have imagined the impacts of Harrington and the others - with Rory McIlroy winning four Majors, attaining world number one and giving back so much to charitable causes in Ireland through The Rory Foundation - would have influenced more youngsters into the sport.

Out of this apparent period of decline in the participation levels, has emerged Leona Maguire.

Evidently not, certainly not on the basis of the numbers and the statistical evidence from the ESRI report.

Yet, out of this apparent period of decline in the participation levels, has emerged Leona Maguire.

The Co Cavan golfer has occupied the world number one position in the amateur rankings for much of the past two years and who - having made the decision to complete her studies at Duke University in the United States, an education that will be completed in 12 months time - is ticking all the boxes, both golf-wise and academically.

I’m still of the opinion that role models are good for young players and, in Leona Maguire, there is the potential for her to be the poster woman, so to speak, in attracting many more young girls into the sport and bucking the general trend of declining numbers.

Indeed, the very manner in which Leona and her sister Lisa took up golf, from a non-traditional base in rural Ireland, with a father Declan with a GAA background and a mother Breda whose own sporting pursuit was on the badminton court, would provide hope that the game can be grown further and that the decline in numbers can be arrested.

Leona’s individual runner-up finish behind Monica Vaughn (by one stroke) in the US collegiate championship - the second time in three years she has been the silver medallist - was a fine accomplishment but there was even better to come in her selection as the WGCA collegiate player of the year following three tournament wins and the pertinent statistic that she never finished worse than sixth in any competition all season. That’s some level of performance.

As a multiple winner of the collegiate player of the year, Maguire has now joined every elite company. Since 2000, only Lorena Ochoa and Amanda Blumenherst have managed such a feat. Maguire’s consistency since starting her collegiate career with Duke has been nothing short of remarkable, with 26 top-10 finishes in her 30 competitive appearances.

These are the deeds of an exceptional talent, someone who, if not already, has the makings of being a role model to attract more girls into golf.

That she is making such an impact in the amateur ranks that only whets the appetite for what awaits when, in a year’s time, she turns professional. As it is, she is already pioneering a new, uncharted pathway for Irish women’s amateur golf.