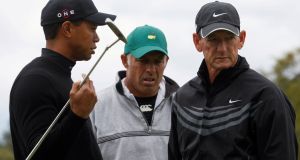 Tiger Woods’ former coach Hank Haney has been suspended from his radio show after being accused of making racist and sexist comments on the programme.

Speaking with co-host Steve Johnson on SiriusXM PGA Tour Radio, Haney predicted “a Korean” would win this week’s US Women’s Open and said he could not name six players on the LPGA Tour, unless they had the last name “Lee”.

On Thursday the PGA Tour and SiriusXM released a joint statement saying: “Mr. Haney’s comments on women’s professional golf were insensitive and do not represent the views of the PGA Tour or SiriusXM.

“At the PGA Tour’s instruction Mr. Haney has been suspended from the SiriusXM PGA Tour Radio channel. SiriusXM is reviewing his status on SiriusXM going forward.”

The statement continued: “The PGA TOUR is committed to and proud of the increasingly diverse makeup of our fan base.

“Not to mention the power and accomplishments of the game’s world-class, global players — both on the PGA TOUR and LPGA, whom we are working with more closely than ever before.

“SiriusXM proudly covers and supports both women’s and men’s golf and the athletes that make them great.”

Former US Open winner Michelle Wie, who is currently sidelined through injury, was furious with the comments and wrote on Twitter: “As a Korean American female golfer, these comments that HankHaney made disappoint and anger me on so many different levels.

“Racism and sexism are no laughing matter Hank...shame on you. I don’t ever do this, but this must be called out.”

Later in the programme Haney insisted “I am definitely not a racist” and the 63-year-old also posted a statement on social media which read: “This morning I made some comments about women’s professional golf and its players that were insensitive and that I regret.”