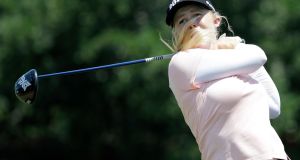 Stephanie Meadow tees off the second tee during the first round of the US Women’s Open in Charleston. Photo: Steve Helber/AP Photo

Stephanie Meadow never stopped trying, and her resolve was finally rewarded with a birdie on her finishing hole as the 27-year-old Northern Irishwoman opened with a 74, three-over-par, in the 74th edition of the US Women’s Open at the Country Club of Charleston in South Carolina.

One shot further back is Leona Maguire who signed for a 75 after dropping two shots in her final two holes.

Meadow’s quest for a birdie had proven fruitless until she reached the 533 yards Par 5 ninth, her closing hole. Up to that point, she’d run up four bogeys – on the 13th, first, third and sixth holes – but gamely stuck to her task to at least finish with some momentum in her bid to survive the 36-holes cut.

Maguire – who has won twice this year on the Symetra Tour and looks to be well on the way to securing her LPGA Tour card – fought back from a double bogey at the second and a bogey at the sixth with birdies at the seventh and ninth. However, a dropped shot at the 11th and two more at the 17th and 18th saw her finish the day in a tie for 101st with plenty of work to do if she is to make the cut.

Higa, ranked 49th in the Rolex world rankings, required just 27 putts in her opening round to claim the early lead. A winner on the Japan LPGA Tour earlier this season, Higa, who is chasing a first Major title, arrived in Charleston last Saturday to prepare. “I didn’t expect much, to come and play that well,” she observed.

Henseleit, with six top-10 finishes on the Ladies European Tour so far this season, only earned her spot in the field as an alternate from the international qualifier in London and is playing professional for the first time in the United States.

“It’s a completely new experience for me to play here, and the grandstands are huge and very many people around, but I don’t feel like that it’s too much for me. So I really like that. I really like to play in front of many people,” said the German.

American Nelly Korda, the world number 11, claimed “something just clicked on the range” ahead of opening her championship bid. Korda – who won the Australian Open in January in a fast start to the season which included five top-10s in her first six appearances – opened with a two-under par 69 .

“Throughout your career, you’re going to go through ups and down and not feel 100 percent with your game,” said Korda, who has struggled with her game of late including a missed cut in the recent LA Open. “Last week (in Williamsburg) I was a little bit iffy, so today I actually got my feeling back a little bit more and started hitting it more at pins like I used to be. I think it’s just (a) mental (thing).”