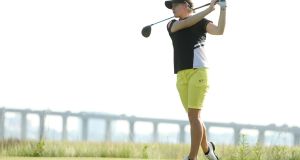 Charley Hull of England hits a tee shot ahead of the 2019 US Women’s Open Championship at the Country Club of Charleston. Photo: Streeter Lecka/Getty Images

The USGA normally has to wait until June before the annual necessity to hunker down as criticism flies from all directions. The men’s US Open, as beset by complaints relating to course setup or rules matters, has become the most controversial tournament in golf. At Pebble Beach next month, another fevered chapter will surely play out.

This week’s US Women’s Open, which takes place in Charleston, also under the guidance of the USGA, has been afforded a noisy backdrop of its own. An anonymous survey carried out by Golf Digest – interviewing players, caddies, coaches and the like from golf’s top level – produced all manner of stinging rebukes towards the USGA. Whether or not the cloak of anonymity enhances or embellishes viewpoints is up for debate but the overriding message was clear; golf’s ruling body in the US has few prominent supporters. The analysis was scathing.

Within this survey came the revelation that leading male players were seriously unhappy at what they perceive as a disproportionately low increase in the US Open prize purse after a 2015 TV deal delivered roughly $100m per year to the USGA. Last year’s US Open at Shinnecock Hills had a purse of $12m, with Brooks Koepka walking off with $2.16m. The television deal in question covers the male and female competitions.

Unwittingly, this raises questions directly relating to this week at the Country Club of Charleston. The US Women’s Open, a USGA operation, carried a prize fund of $5m until a $500,000 increase for this year was announced on Tuesday. The winner will collect $1m. So as golf seeks to enhance diversity and portray itself as a forward-thinking sport, a financial chasm exists between what are equivalent male and female tournaments.

The US Open does carry the largest prize in women’s golf but this is an unsatisfactory scenario. The issue looked even more stark as the USGA followed up the announcement with similar in relation to Pebble Beach. The men will now play for $12.5m. Even if equal pay remains a leap of faith, the gulf between golf’s US Opens – operated by the same organiser – is huge.

The public reaction from players has at least been positive, even if the USGA has passed up an opportunity to deliver a major statement. “I think it’s amazing news,” said Lexi Thompson, the world No 8. “It strikes us as the women’s game is growing so much. I think it is very well-deserved, but I think overall golf is just growing as a sport. With it being in the Olympics and for us getting more sponsors, getting more tournaments each and every year, it’s great to see.”

Inbee Park, the world No 7, is seeking a third US Open win and first major success since 2015. Park has been among those to point to searing temperatures in South Carolina as significant for the make-up of this event.

“The US Open gives me special memories in my career and especially the last one I won in 2013. I still remember like yesterday,” Park said. “It was my third major in a row for that year, and becoming two-time champion of the US Women’s Open is just something that’s unforgettable in my golfing career. If I can write my name one more time on the trophy, that will be just something unreal.

“We’re going to have to really fight the heat this week. The weather is really, really hot. I really struggled to play 10 holes on Monday in the heat. I’m just trying to get my body ready for the tournament starting Thursday and I think it’s just going to be a really, really hot week.” – Guardian

Tiger Roll still on track for Aintree after placing fifth in Boyne Hurdle 16:17
Andy Farrell recalls 13 players to Ireland squad ahead of England clash 15:11
Leaving Cert prep forces Beibhinn Parsons out of rest of Six Nations 15:01
Kieren Westwood: ‘I feel obliged to clear my name and defend myself’ 14:01
All in the Game: No Moore medals for Steven Gerrard 12:34
Here is your handy guide to sport on television this week