Rory McIlroy’s driver betrays him in opening 75 at Memorial 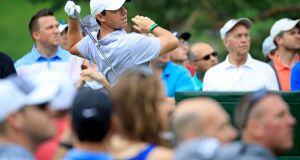 Rory McIlroy watches his tee shot on the 15th hole during the first round of The Memorial Tournament at Muirfield Village Golf Club. Photo: Andy Lyons/Getty Images

An out-of-sorts Rory McIlroy – with his driver misbehaving and his putter cold – struggled to an opening round 75, three-over-par, in The Memorial tournament at Muirfield Village which immediately put him on the back foot to survive the cut in his quest to add the title to his career curriculum vitae.

Playing for the first time since the US PGA at Bethpage Black a fortnight ago, the 30-year-old Northern Irishman suffered two double-bogeys in an adventurous first round to lie all of 10 strokes adrift of first round leader Ryan Moore, who included four straight birdies at one stage in a bogey-free round of 65, seven-under.

McIlroy’s problems with the driver proved costly. Twice, he was forced to reload off the tee after errant tee shots: on the Par 5 15th, where he pushed his drive wildly left and then found heavy rough down the left with his second tee shot, he ran up a seven; and, then on the Par 4 second, he was again in trouble to the right with his first tee shot which flew over an out-of-bounds fence.

Following his ninth top-10 finish of the season in the US PGA, McIlroy’s first round at Jack’s Place – in a tournament hosted by Jack Nicklaus – went badly awry and he faces a battle to survive the midway cut, his problems in stark contrast with a rejuvenated Jordan Spieth, one of his playing partners, who twice chipped-in and required just 22 putts on an opening round 66 to sit second at six under.

Tiger Woods’s last two appearances on tour have come in the Majors – a win in the Masters followed by a missed cut at the US PGA – and, just one win shy of Sam Snead’s all-time PGA Tour record of wins, he finished strongly with late back-to-back birdies on the seventh and eighth to sign for a 70.

“It was one of those days where it could have flipped, I could have got a few more out of it,” remarked Woods, the highlight of his round coming on his penultimate hole where he hit an eight-iron tee-shot to two feet on the Par 3 eighth. Woods is chasing a sixth Memorial title and also bidding to equal Snead’s career record 82 wins on the PGA Tour.

Playing in a group with defending champion Bryson DeChambeau and Justin Rose, the trio were put on the clock after nine holes. “That made things a little more complicated,” said Woods, who added: “That was frustrating because we still had, what, the last eight holes while we were on the clock. With the conditions the way they are, the caddies are communicating and trying to leapfrog one another. They’re trying to help out. We’re trying to either tap out, or you know, take a while to mark a golf ball to help the other players. And so it’s one of those things, it’s a group effort to try and get a into position. The group ahead of us, (Justin Thomas), he doesn’t take a lot of time, Rory (McIlroy) plays quick, and Jordan was, what, seven under through (13) holes, so they’re obviously playing fast. And we were obviously not.”

However, he claimed to be much improved healthwise after being under the weather at the PGA.”I’m definitely feeling a lot better, and I’m hitting the ball a little better. I just need to not make a couple of loose swings (going forward) like I did today,” said Woods.