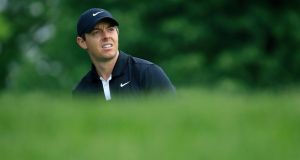 Rory McIlroy watches his tee shot on the third hole during the Pro-Am ahead of The Memorial Tournament at Muirfield Village Golf Club in Dublin, Ohio. Photo: Andy Lyons/Getty Images

Rory McIlroy believes the USGA should be given a chance to “redeem themselves” when staging the US Open at Pebble Beach but warned that more issues could cause further player unrest.

McIlroy and 2016 champion Dustin Johnson were this week named among the players who had considered a boycott of the US Open, according to a report in Golf Digest.

The tournament has been beset by problems in recent years and organisers the USGA admitted they went “too far” with the set up of Shinnecock Hills last year after only three players broke par in a third round during which Phil Mickelson was penalised two shots for hitting a moving ball as it rolled off the 13th green.

In 2015, the greens at Chambers Bay were likened to “putting on broccoli” by Henrik Stenson and Gary Player felt the course was designed by “a man who had to have one leg shorter than the other”.

But it was the bizarre rules decision — or rather indecision — in 2016 which left the eventual winner Johnson, other players, officials and spectators unsure of what his score was with just seven holes to play, which reportedly prompted talk of a boycott.

“We had about 10-15 guys who were willing to sit out after 2016,” Golf Digest quoted a winner of multiple PGA Tour titles as saying.

“Some of them were big names — Dustin was one, Rory was another.”

Speaking ahead of the Memorial Tournament at Muirfield Village in Ohio, McIlroy told reporters: “They (the USGA) are trying to do as good a job as I can and I think they’ll admit that they’ve made a couple of mistakes over the past few years.

“I don’t run golf tournaments and I don’t set golf courses up so I think they should seek the opinion of people that do that every week.

“In my head, growing up watching the US Open, it was tight fairways, it was thick rough, a premium on accuracy and precision and I think some the courses we’ve played and some of the setups over the past couple of years have went a little bit away from that.

“We play one Open Championship a year, we don’t need to play two. I think it’s lost its identity a little bit and I would like to see them go back to that because it worked.”

McIlroy is looking to join Tiger Woods as the only players to win the Players Championship and Memorial Tournament in the same season, while a sixth victory in Jack Nicklaus’s event would see Woods equal Sam Snead’s record of 82 PGA Tour titles.

“To get into those numbers takes longevity and it takes hot years,” Masters champion Woods said ahead of his first start since missing the cut in the US PGA Championship.

“I think it’s been 10 years where I’ve won five or more tournaments and you need seasons like that. That’s something that I’m very proud of because it’s not something that happens overnight.

“To be able to come this close, to get to one behind Sam Snead, has been pretty amazing and hopefully I have a few more.”