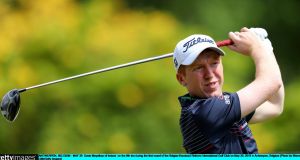 Gavin Moynihan of Ireland on the 9th tee during the first round of the Belgian Knockout at Rinkven International Golf Club. Photo: Warren Little/Getty Images

Sweden’s Anton Karlsson fired an eight-under-par 63 to claim the lead after the first round of the Belgian Knockout in Antwerp.

Karlsson is seeking a first European Tour title after graduating from the qualifying school for a second time last year, the world number 317 being part of a nine-way tie for second behind Justin Harding in Qatar in March.

Gavin Moynihan – the only Irish player in the field – opened with a round of 70 to sit at one under par and in a tie for 40th.

The top 32 from each side of the draw after 36 holes of traditional stroke play will advance to the knockout stages over the weekend.

Players will then go head-to-head over nine holes of stroke play, with the player with the lowest score advancing to the next round until there is just one left standing.

Scotland’s Robert MacIntyre, who has finished runner-up in each of his last two starts, is part of a six-way tie for fifth on five under par following an opening 66.

Belgium’s Thomas Detry gave the home fans plenty to cheer with an opening 67, although tournament host and his World Cup-winning partner Thomas Pieters was 143rd in the 144-man field after a 77.

“I’m very happy,” Detry said. “It wasn’t that easy out there, a bit breezy and cold this morning as well, but very happy with how I played out there. I got some good vibes, I played great here last year and I’m looking forward to tomorrow.

“It’s quite fun to see all the little kids who haven’t had a chance to watch us play at tournaments and to see them out here it’s quite fun, and good for the game of golf in Belgium.

“I remember how I was looking up at Nico (Nicolas Colsaerts) when I was little, you know Nico was a bit of a god for me and now he has become a friend, so I know exactly what they are feeling. Those kids are probably pretty excited and seeing stars in their eyes, so it’s quite fun.”