Rory McIlroy opens with a disappointing 74 at Valspar Championship 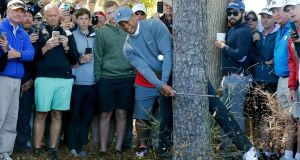 Tiger Woods plays his second shot on the fourth hole during the first round of the Valspar Championship at Innisbrook Resort Copperhead Course in Palm Harbor, Florida. Photograph: Michael Reaves/Getty Images

With less than a month to go before he bids to complete the career Grand Slam, Rory McIlroy experienced yet further frustration stateside in the Valspar Championship as the 28-year-old Northern Irishman struggled to a disappointing opening round 74, three-over-par, that has left him in a fight to survive the midway cut.

After contending in both the Abu Dhabi Championship and the Dubai Desert Classic in his season-opening foray in the Gulf, McIlroy’s endeavours on the PGA Tour have proven to be rather less inspiring and his travails continued in his debut appearance at the Copperhead course at Innisbrook resort in Florida.

While Canadian Corey Conners – ranked 608th in the world – claimed the clubhouse lead with a four-under 67, it was an altogether different story for McIlroy.

A high pollen count at the Tampa resort caused as many problems for players as the wind which whistled through the tree-lined course.

McIlroy started on the 10th and safely negotiated the infamous stretch of holes known as the “Snake Pit,” from the 16th. In fact, McIlroy covered his outward run with a run of nine straight pars; but it was a stark contrast on his back nine as he claimed only one birdie to go along with two bogeys and a double-bogey.

That double-bogey came on the Par 5 seventh where McIlroy’s tee shot was pushed right into the trees and he could only play a recovery shot back towards the fairway and, then, after eventually reaching in green in four shots, three-putted for his double.

Ironically, putting was generally the stronger part of McIlroy’s game as he took only 26 putts in total in his round.

McIlroy is building up towards the Masters at Augusta National next month, where he will seek to complete the career Grand Slam. The Green Jacket is the only missing item that he has yet to win in the Majors, and McIlroy – and his father Gerry – paid a reconnaissance visit to Augusta National last week as part of his preparation.

One factor which has followed McIlroy around since returning to the US Tour has been the wind, and the world number 12 conceded it has occupied his mind.

“I’ve been sort of trying to sync everything up again, just getting a little bit too much on my left side, trying to keep the ball down in the wind and started to get ahead of it and hitting shots to the right,” he explained.

Playing the Valspar for the first time in his career, McIlroy’s opening round 74 has left him with a lot of work to do if he is to make the midway cut.

And McIlroy’s fellow Irishmen on duty also struggled. Séamus Power and Pádraig Harrington face a major battle to make the cut after both posted opening 76s.

Yet to win as a professional on any circuit, Conners emerged as the surprise early clubhouse leader: the Canadian – a tour rookie having progressed off the Web. com Tour – with a best finish of tied-29th in the Farmers Insurance Open, played like a veteran.

The 26-year-old only earned a place in the field on Monday as an alternate but made the most of his good fortune to jump to the top of the leaderboard with an impressive display of the essentials, finding fairways and greens.

“There’s nothing real flashy about my game, I don’t overpower it but everything is really solid and on the tough courses just getting the ball in the fairway and getting solid iron shots on to the green and spot where you can get a chance for birdie . . . . . definitely I like the challenge and like golf courses that require you to put a premium on the fairway and hitting the green,” explained Conners of how he negotiated a course that caused others, among them McIlroy, so many problems.

Paul O’Donovan will ‘go with the flow’ as talk turns to Tokyo Olympics 06:35
Neil Lennon ‘won’t walk away’ after Celtic stumble again 06:30
Solskjær praises Pogba after strike sends Man United top 06:31
Andrew Porter ready to lay down a marker at Thomond Park 06:35
Joanne O'Riordan: Why I want to live a bit more like Ted Lasso 06:00
Here is your handy guide to sport on television this week