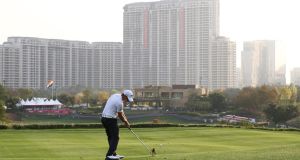 Argentina’s Emiliano Grillo plays his second shot on the 18th hole during day one of the Hero Indian Open at DLF Golf and Country Club in Delhi, India. Photograph: Matthew Lewis/Getty Images

Argentina’s Emiliano Grillo beat the sunset to post a course-record equalling 65 and open up a two-shot lead on day one of the Hero Indian Open.

DLF Golf and Country Club is considered one of the most difficult courses on the European Tour and its severity meant that 24 players were unable to finish their opening rounds on Thursday.

The shadows were lengthening as Grillo completed his round but he made an eighth birdie of the day on the last to get to seven under and lead the way from Spaniard Pablo Larrazabal, Italian Matteo Manassero and American Paul Peterson.

The 25-year-old plays mainly in the United States, where he graduated from the Web.com Tour and won his first event as a PGA Tour member in 2015 at the Frys.com Open.

He is playing on an invite this week in Delhi and admitted he had to be at his very best to equal the course record set by Malaysian Gavin Green last season.

“You have no idea how difficult the course is,” he told europeantour.com. “I had to play almost perfect golf to shoot a seven under.

“I think anywhere else it would have been close to a 59 or something. It was definitely a magnificent round of golf.

“I’m very happy with the way I handled myself out there. It was very tough and I was able to make some good putts and hit the fairways when I needed to.”

Grillo birdied the first and while he gave the shot back on the second, he never looked back after that, making further birdies on the fifth, seventh, eighth, ninth, 11th, 13th and last.

Larrazabal created one of the stories of the day as he was woken by a European Tour official just 38 minutes before his tee-time after his alarm did not go off, raced to the course and carded nine birdies to go with a double and two bogeys.

Frenchman Adrien Saddier and South Africa’s Keith Horne were at five under with holes left to play, with Scot Marc Warren a shot further back and England’s Matt Wallace at three under.

Darren Clarke closed with back-to-back birdies as he opened with a level-par 72 that left the Northern Irishman in a share of 37th position.

Play suspended due to darkness with 8 groups left to finish

(Britain and Ireland unless stated, par 72, (a) denotes amateur)

1 PSG break quarter-final curse with stunning injury-time victory
2 Exiled Seán O’Brien not ruling out a third Lions tour
3 Paul Clarke steps aside from Dublin role
4 Bundini Brown: The man who invented ‘float like a butterfly, sting like a bee’
5 Principality stadium in Cardiff to remain as a field hospital for rest of year
Real news has value SUBSCRIBE