That golf-winning feeling returns with relish for Wie 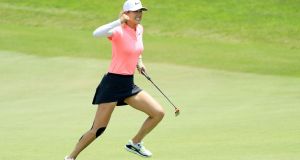 Michelle Wie of the US celebrating her birdie on the 18th on her way to winning the HSBC Women’s World Championship in Singapore. Photograph: Andrew Redington/Getty Images

Winning is everything for Michelle Wie, and after she drained an astonishing birdie putt from off the green on the last hole of the HSBC Women’s World Championship on Sunday it was a feeling the American could reacquaint herself with after a long wait.

The 28-year-old’s last victory was at the 2014 US Open, and after subsequent years battling injuries and technical changes Wie had some unfinished business in Singapore after she led after three rounds a year ago but failed to seal the deal.

This year she started her final round five strokes adrift of leader Nelly Korda but chipped away at the deficit with six birdies over her first 17 holes until she completed her coup de grace with a shot that will be remembered for years.

Wie was entrenched in a four-way tie for the lead as she watched her approach shot land short of the green, but just moments later she was galloping towards the hole and pumping her fist as her ambitious 45ft effort found the cup.

“Winning is everything. I mean, there is no better feeling than when you sink that winning putt. It’s a high, for sure,” Wie told reporters after signing for a seven-under 65 to complete a one-stroke victory on 17-under for the tournament.

“You know that good feeling is on the other side. It’s just everything. Winning’s everything.”

Wie thanked her parents, sponsors and fans for sticking by her in the almost four-year wait for a title victory, but saved her greatest appreciation for caddie Matt Holloway, who she said had played a key role in helping her stay focused in the chase.

“My caddie did a great job of keeping me in the game, and keeping me entertained throughout the round. It was a lot of fun today.

“I just kind of wanted to get revenge after last year a little bit. I kind of came with a slight chip on my shoulder in the morning, and I knew that I had to shoot low to even have a chance, and everyone played great today.

“Everyone was really clustered up there on the leaderboard. I’m just really proud of myself for making a lot of birdies and keeping going, and never really getting out of my head, which I’m really proud of doing today.”

A missed short birdie putt on the 16th was “the kick up the butt” Wie needed to look for something special over her closing holes, and after seeking counsel from Holloway one final time, the American made her mind up and committed to her task.

“And I was like, ‘It’s above it, Matt. It’s above it.’ We’re just like, ‘okay, above it’. So I just knew I wasn’t going to hit that short. I think I hit that hole pretty hard. But I think that has to be the best putt of my career so far.”