Paul Dunne struggles as Paisley makes a profile in Mexico 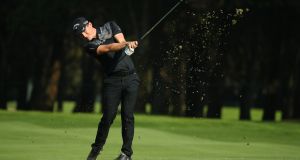 England’s Chris Paisley may not have been deemed worthy of a profile picture on the tournament website, but his name featured proudly near the top of the leaderboard after the first round of the WGC-Mexico Championship.

Paisley was ranked 289th in the world at the end of 2017, but won his maiden European Tour title in the BMW SA Open in January and followed that up with fifth-place finishes in both Abu Dhabi and Dubai.

That secured his World Golf Championship debut in Mexico City via the top 10 on the European Tour’s Race to Dubai and the 31-year-old from Hexham made the most of his opportunity in an elite 64-man field competing for a winner’s cheque of $1.2million from a prize fund of $7.2million.

Ireland’s Paul Dunne booked a place in the tournament by way of his top-20 finish in last year’s Race to Dubai but all did not go to plan for the Greystones man on the opening day as he could only manage a round of 73 to finish at two over par, nine shots off the lead held by Louis Oosthuizen at seven under.

Starting at the 10th Dunne was in trouble early on with bogeys at three of his first five holes before he pulled a shot back thanks to a magnificent approach to the 16th – his eighth hole – which spun back and lipped out of the hole, almost going in for an eagle two.

However, two more bogeys on his back nine left him floundering at four over before late birdies at his 15th and 18th limited the damage.

Englishman Paisley fired seven birdies and a solitary bogey to card an opening six-under-par 65 at Chapultepec Golf Club and end the day just a shot behind leader Oosthuizen.

“It’s great, a bit surreal in some ways,” Paisley told Sky Sports. “I think I maybe caught myself out a bit on the last few holes, maybe got a little bit ahead of myself and realised where I was. To be up there playing so well and competing with guys like this is fantastic.”

Paisley held the outright lead after following a front nine of 31 with birdies on the 10th, 14th and 15th, but bogeyed the 16th shortly before Oosthuizen added an eagle on the 15th to five earlier birdies to vault to the top of the leaderboard.

“My putting was really good,” Paisley added. “The first 15 holes tee to green, I was really solid, hit a lot of fairways, a lot of greens. (It was) a bit of a scrappy finish with a few missed clubs and a poor shot on 17 but I held it together.

“I gave myself a lot of chances but they’re tough greens to putt on and to hole as many putts as I did, I’m delighted.”

Oosthuizen, who finished 24th in the Honda Classic last week after a disappointing final round of 75, said: “I’ve been hitting it really good for the last three or four weeks, two of those just practising back at Palm Beach and last week I felt I played really well and just caught up in the Bear Trap on Sunday.

“I drove it pretty well today, I’ve got a lot of confidence with my driver and was just teeing it up on a lot of holes and making good swings.”

World number two Jon Rahm is three off the pace after a 67, with fellow Spaniard and Masters champion Sergio Garcia a shot further back. World number one and defending champion Dustin Johnson shot 69, but last year’s runner-up and European number one Tommy Fleetwood struggled to a 72.