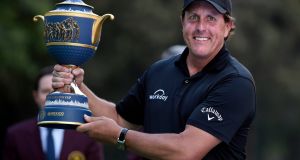 Phil Mickelson ended a five-year victory drought as he sank a par putt on the first playoff hole to defeat Justin Thomas at the WGC-Mexico Championship on Sunday.

The 47-year-old hall of famer, who had not won since the 2013 British Open, was thrilled to find his golden touch and make a long-awaited breakthrough at the Club de Golf Chapultepec in Mexico City.

“For it to happen here in Mexico City in a WCG event against the best players in the world is such an encouraging and validating feeling for all the lows and difficult times I have experienced the last four years,” said Mickelson, who claimed his 43rd PGA Tour win.

“This is hopefully going to propel me on to better stuff.”

Thomas, who had waited for more than half an hour after a closing eagle to start the playoff, hit first and was long on the 17th hole.

The 2017 PGA champion then missed a putt for par to end a weekend in which he had come from 11 strokes back to contend.

The Americans completed regulation tied at 16-under 268 for a one-stroke lead after Thomas, the earlier finisher, shot seven-under 64 and Mickelson 66.

England’s Tyrrell Hatton and Spaniard Rafa Cabrera Bello both shot 67s to tie for third at 15-under 269.

Hatton had been tied with Mickelson and Thomas going into the last hole, but a bogey on the par-four 18th ended his hopes.

Overnight leader Shubhankar Sharma of India crashed out with five bogeys in a final round 74 to finish tied for ninth at 274.

Thomas, the playoff winner in last week’s Honda Classic, appeared headed for another title when his eagle at 18 gave him a two-stroke lead.

“To make that wedge (shot) on 18 is pretty unbelievable,” said Thomas, who had six birdies and a bogey in his final round to back up a course record 62 on Saturday.

But Mickelson, who had led earlier before a bogey at 11 temporarily stalled him, fought back with birdie putts at the 15th and 16th holes to reel in Thomas.

“There was none bigger than that one (on 16) because it got me tied to the leader that was already finished and in the clubhouse,” Mickelson said.

Paul Dunne’s final round 71 left him seven over par overall.