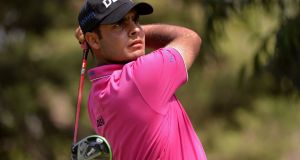 Shubhankar Sharma: takes a two-shot lead into the final round of the of the WGC-Mexico Championship Championship at at Club de Golf Chapultepec. Photograph: Orlando Ramirez-USA TODAY Sports

In what looms as a David versus Goliath confrontation – a five-times Major champion against a 21-year-old in his first PGA Tour event – Mickelson and Sharma will tee off in the final group along with Tyrrell Hatton at Club de Golf Chapultepec in Mexico City.

Sharma, who leads Mickelson, Hatton, Sergio Garcia and Rafa Cabrera Bello by two shots, will have a head start, but nonetheless will be an underdog against such elite company.

Speaking after a third-round 69 on Saturday for a 13-under 200 total, Sharma explained how he and his caddie had approached Mickelson on the practice putting green before the round.

“He thought we were media and he said, ‘not right now, after the round’,” Sharma told reporters, laughing as he recalled the matter.

Mickelson could perhaps be excused for not recognising Sharma, who has never played in the United States.

Despite two European Tour victories already this season – in South Africa and Malaysia – it is fair to say a Sharma victory on Sunday would reverberate around the golf world.

The 21-year-old is one great round from becoming the youngest winner of a World Golf Championships (WGC) event, as well as the first to win in his first WGC start.

Sharma would also be the first player to win on his PGA Tour debut since Jim Benepe at the 1988 Western Open, eight years before the Indian was born.

Sharma is so young that Tiger Woods is too old to be his idol. Rather, he was inspired by staying up all night to watch Rory McIlroy win the 2011 US Open.

“It went on until six in the morning back home,” Sharma recalled.

“I remember I was so inspired that I didn’t sleep, I just went straight to the range and hit balls for two hours.”

A Sharma victory on Sunday would also be greeted with glee by golf administrators keen to tap the huge Indian market, which is perhaps in need of a genuine superstar from the country to make it happen.

Sharma would also earn instant PGA Tour membership and an automatic invitation to next month’s Masters.

But he would have gone to bed Saturday night no doubt knowing the magnitude of the task facing him.

As well as the foursome lurking just two strokes behind, defending champion and world number one Dustin Johnson trailed by three.

And with last week’s Honda Classic winner Justin Thomas four strokes behind, little wonder Sharma was rated only a 9/2 chance of winning by some betting firms.