Rory McIlroy has a spring in his step after impressive return 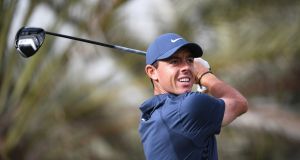 Rory McIlroy is looking for his third victory in the Dubai Desert Classic. Photograph: Martin Dokoupil/EPA

Rory McIlroy will pursue a first win since September 2016 with a “spring in his step” after exceeding expectations on his return to action.

McIlroy has an excellent recent record in the Omega Dubai Desert Classic, winning the tournament twice and compiling five other top-10 finishes in his last seven starts, but missed last year’s event with the rib injury which disrupted his entire season.

The four-time major winner called an early end to his winless campaign, just the second of his professional career, in October, but practised hard over the winter — despite revealing that he has an irregular heartbeat — and finished in a tie for third behind European number one Tommy Fleetwood in Abu Dhabi.

“I’m obviously really happy with how everything went last week,” McIlroy, 28, told a pre-tournament press conference. “If someone had said to me at the start of the week you’d shoot 18 under par your first week back on, I thought, quite a difficult golf course, I would have thought 18 under par would have a great chance to win.

“I feel like I’ve got a bit of a spring back in in my step because of what happened last week and I’m very confident in myself. Again, it’s a golf course I know how to get around and I know how to shoot good scores on.

“It has a lot of great memories. I’ve won here twice. Dubai is a place that I’ve gotten to know very well. It’s a place I love to come back to.

In McIlroy’s absence, Ryder Cup team-mate Sergio Garcia lifted the title 12 months ago and went on to claim his first major title in the Masters, just as 2016 champion Danny Willett did a year earlier.

“It’s obviously great to be back here in Dubai defending our title,” said Garcia, who started his 2018 campaign with a five-shot win in the Singapore Open last week. “Beautiful weather, the course looks great and the greens are rolling very nicely.

“It’s not like every time that every guy that won here has won the Masters, or for that matter a major, throughout that year. I guess it’s just a coincidence it happened last year and the year before. But you know, neither Danny or I are going to complain about it for sure.

“For me last year winning here against Henrik (Stenson), with Henrik playing well, and myself playing well, and kind of keeping him off my back throughout the whole day, I think that was the most important thing mentally. That helped me a lot. It gave me more confidence as I went on through the year.”

San Francisco 49ers increase stake in Leeds United to 37 per cent 18:10
Jockeys shocked and appalled at Viking Hoard case 17:00
Down Royal facing inspection ahead of Tuesday’s fixture 16:31
Pro14 release fixture details for remainder of season 18:15
England rip through Sri Lanka to seal series victory 12:29
Here is your handy guide to sport on television this week