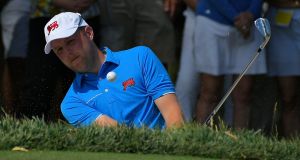 Paul McBride hits out of a bunker on the ninth hole during his singles match defeat at the Walker Cup at Los Angeles Country Club. Photograph: Mark J Terrill/AP

As thumping as Britain and Ireland’s loss – by 19-7 – was to the United States in the Walker Cup at Los Angeles Country Club (a future US Open site!), some perspective should be provided; in this biennial team match, home advantage plays a huge part to the extent that it is 10 years since any visiting team managed victory.

It was at Royal County Down in 2007 that the USA last won an away match; and you have to go back to Sea Island, Georgia in 2001 – and a B&I team that featured Graeme McDowell and Michael Hoey – for the last time the visitors secured a win on away soil.

So, it’s a tough ask; always has been, always will be.

Still, the size of the USA’s win – with three players securing four wins from four matches, among them Maverick McNealy who has opted to immediately turn professional – provided all the proof if it was ever needed that this was an exceptionally strong American team with five of them occupying places inside the top-six on the world amateur rankings.

“I think the big advantage has been the length of the course,” claimed B&I captain Andy Ingram, adding: “I think it will be a great US Open course (in 2023), I really do. Our guys aren’t used to playing courses this long. I think they have learned a lot. A couple of them said to me, ‘I need to be longer. I need to hit it longer, I’m going to work on that this winter’. And if it makes them better golfers, it’s got to be good.”

With 11 of the last 13 Walker Cups won by home teams, Ingram added: “The only advice I could really give [British and Irish players] is that they need to get over here as often as they can and play as often as they can, because the courses are different. They’re a lot longer, not as tight, but the rough is penal and the greens are incredibly quick . . . it is a different type of golf.”

Paul McBride, the lone Irishman on the team, won his opening foursomes match with Connor Syme on Saturday but subsequently lost his other three outings. The 21-year-old Dubliner returns to complete his studies at Wake Forest University, where he is in his final year, but is expected to hold off turning professional until after next year’s Eisenhower Trophy (world amateur team championships) which will take place at Carton House in late-August/early-September.