Out of Bounds: Golf and charity have long gone hand-in-hand 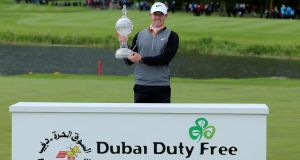 After winning the 2016 Irish Open, Rory McIlroy donated his €666,000 winnings back to his charity the Rory Foundation. Photo: Donall Farmer/Inpho

I recently attended a gig at Hermitage Golf Club which impressed me no end. It was a version of Nine-and-Dine which is an increasingly popular concept, where nine holes of competition – in this case a scramble – was followed by dining – in this case a barbecue.

The event showcased a vibrant club atmosphere. The course was full of players (pink items of clothing mandatory) and the clubhouse was full afterwards and humming in a throwback to other times and, perhaps most pertinently of all, it was all for a good cause: all funds raised on the evening were in aid of Breast Cancer Research. More specifically, in aid of an initiative which is part of the “Play in Pink” campaign, responsible for raising over €120,000 nationally last year and on course to break that amount this year as more clubs get involved.

The point here is that golf is an important vehicle for fundraising, whilst also, I’d say, providing an opportunity for clubs to reinvigorate and to enthuse their own membership.

And, certainly, tour players – often portrayed as a selfish lot in a selfish sport – have actually shown themselves through the years to be more givers than takers when it comes to a charitable side.

How many of Christy O’Connor’s famed one-irons found their way to auction, for example? Remember Darren Clarke’s fundraising efforts for victims of the Omagh bombings? Graeme McDowell’s on-going association through his foundation with the Children’s Medical Research Foundation at Crumlin?

And don’t forget Rory McIlroy’s donating back of his €666,000 winnings from the Irish Open to charities associated with the 2016 tournament, which significantly augmented the other funds raised as part of his Rory Foundation’s on-going hosting of the tournament.

Then, there is the daddy of them all, the JP McManus Invitational Pro-Am which, in its time, has raised over €100 million for charitable causes in Limerick and the Mid-West region. The tournament is due to return to Adare Manor in 2020 where the Tom Fazio remake will play host to the world’s leading players.

It should also be pointed out that the PGA Tour in the United States has long advocated giving back to local communities and causes in the week-to-week stops on the circuit, to the extent that $166 million was donated in 2016 alone.

So, golf and charity – more than any other sport it would seem to me – go hand in hand, at local, regional, national and international level. With that in mind and heading into the final three tournaments on the FedEx Cup playoffs stateside, perhaps we should keep a closer eye than usual on how Sergio Garcia gets on.

From this week’s Dell Technologies tournament – the second of the FedEx Cup playoffs which culminate in next month’s Tour Championship at East Lake in Atlanta – the recently-married Spaniard will donate $2,000 for every birdie and $5,000 for every eagle he makes during the season-ending series of tournaments which he will donate to aid those affected by the flooding in Texas caused by Hurricane Harvey.

The connection for the Masters champion of course is that Garcia is married to Texan Angela Akins and the couple recently tied the knot in the Lone Star State. Still, his is a very worthy gesture in recognising the plight of others.

Here’s hoping his putter is hot for the next few weeks.