Adare Manor set to be most expensive green fee in Ireland 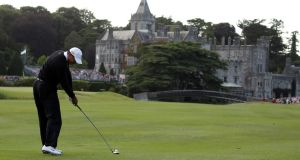 Tiger Woods hits his second shot on the 18th hole during the first round of The JP McManus Invitational Pro-Am event at the Adare Manor Hotel and Golf Resort on July 5th, 2010. Photo: Andrew Redington/Getty Images

A round of golf at the newly redesigned golf course at Adare Manor will be the most expensive in Ireland with green fees set to cost €340 during peak season.

A spokeswoman for the Limerick resort – which hopes to host the 2026 Ryder Cup – confirmed to The Irish Times that the course will open for play in March 2018, while the hotel will accommodate guests from November 23rd.

With every tee box and green rebuilt, the Tom Fazio re-design will cost more for a round than the likes of 2019 British Open host Royal Portrush (£205), 2015 Irish Open host Royal County Down (£200) or the current most expensive green fee in the Republic of Ireland – Old Head of Kinsale (€260).

Meanwhile, current members of the club will have to pay €2,000 to maintain their membership for the coming year with the fee rising to €5,000 thereafter. Membership is currently closed to new applicants during the re-development with fees not yet confirmed for when it re-opens.

The course played host to the Irish Open in 2007 and 2008, as well as the JP McManus Invitational Pro Am in 2005 and 2010 which included the likes of Tiger Woods in the field. The pro am event will return to the course in 2020 with the big ambition being to host the 2026 Ryder Cup.

Racehorse owner and former Manchester United shareholder McManus owns the resort and announced the revamp and creation of 300 jobs in January 2016, as well as his ambition to bring the Ryder Cup to Ireland for just the second time in the competition’s history.

“The Ryder Cup is a very very big ask, and like every other golf club in Ireland, we’d be delighted to host the Ryder Cup, but it’s one of (my) long term dreams,” McManus said at the time.

“The soonest possible time (to host it) would be 2026, if you’re ever going to get it. But, there’s an awful lot of tough competition from within Europe and Britain, and I’m sure, from the rest of Ireland.”

“I do believe we have the facilities and an area and a venue that can cater for it.”

The newly redesigned course will feature bentgrass greens, including SubAir technology beneath every putting surface offering a drainage system seen at just a few golf courses around the world – one of which is Augusta National.

However, the resort suffered a setback recently when a fire significantly damaged the newly renovated clubhouse on August 13th.

Gardaí confirmed that there had been no foul play involved in the fire. Sources at the club said at the time that it would not delay the scheduled reopening date.

The resort’s website is currently taking hotel bookings from November 23rd with rates ranging from €325 for a “classic king room” to €1,995 for a “signature suite”.