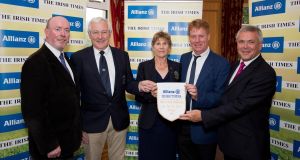 There’s a bond between Michael and Margaret McMahon that goes beyond the mere fact that they’re actually husband and wife.

Let’s drift back a few years to a captain’s drive-in at Gort Golf Club where Michael’s first action – a badly hooked drive – was to hit Margaret on the head with a golf ball travelling quite a pelt: cue 999 calls, her dispatch in an ambulance and the need for a number of stitches and, we trust, some follow-up flowers and TLC from the hubby.

Fast forward to 2017 and, in a year where Michael and Margaret share the distinction of holding the respective men’s and ladies’ captaincies at Gort, the golfing duo – with Gerry Broderick completing the team – showed that such hooked drives and emergency hospital visits are now only part of the story as the westerners completed another worthy chapter with a stunning victory in the Allianz Irish Times Officers’ Challenge national final at The K Club.

In difficult, windy conditions, the Gort team – Michael playing off 22, Broderick off 13 and Margaret sporting a handicap of 28 – contrived to conquer the wonderfully conditioned Palmer Ryder Cup course with a score of 81 points (two of three counting on each hole) to finish nine points clear of runners-up Shandon Park with Fota Island edging out tournament hosts and defending champions The K Club for third.

With Galway capturing the Liam MacCarthy Cup, perhaps there’s something in the water out west these days.

Anyway Gort – who now have a pennant to proudly display in the clubhouse, with each winning member also receiving beautiful Newbridge cutlery – were in a league of their own in outplaying all comers in this hugely popular competition which featured qualifiers at Portmarnock Links, Cork, Malone, Mount Juliet and Galway Bay before 23 teams battled it out in the national final.

“Ah, I just can’t believe it,” repeated Michael McMahon after Gort’s win, during which his wife Margaret admitted to “early nerves” which saw her fail to make any impact on the card for the opening four holes.

In such circumstances, you’d imagine that hubby Michael would be the one seeking to calm her down.

“Not a bit of it,” quipped Margaret, who acknowledged that it was actually Broderick – a seasoned player having captured Connacht Mixed Foursomes honours with the club last year – who provided the calming influence.

“Calm down, relax, he kept telling me,” recalled Margaret of Broderick’s on-course psychology that worked a treat as she contributed to the card no fewer than 11 times over the remaining holes, including a par five on the 10th (for four points).

In what was a solid, all-round team performance, Michael got the team off to a flying start with a birdie on the Par 4 first hole where he hit a rescue club to five feet and calmly rolled in the putt. For strongman Broderick’s part, there was also a birdie to jot onto the scorecard: his came on the Par 5 fourth. Little did they know, they were already leaving most teams in their slipstream by that stage.

As it happened, the real battle was for the runners-up prize and Shandon Park – which has produced players such as multi-European Tour winner Michael Hoey in a rich history – managed to claim second place by the smallest of margins. The Belfast club trio of Diane Conway, Ian Hanna and Lyle Carson, who fought through a knee ligament injury, finished with 72 points with Conway – who birdied the ninth, their finishing hole – acknowledging how well the team had “dovetailed” through the round.

Fota Island might look back with some regret on how they played the Par 4 seventh hole, a favourite of course owner Dr Michael Smurfit. It didn’t dispense any favours however to the Cork trio who registered a complete blank on the difficult hole which has water in play down the right off the tee and also in front of the green.

Seán McGrath, chief executive offer of Allianz, commended The K Club on the superb quality of the golf course which provided a worthy test for all the finalists and congratulated all of the teams who had reached the final.

“This is a special, unique competition which brings together the captains, men’s and ladies, with their officers and I congratulate you on your election to office and the contribution you make to the sport,” he said.