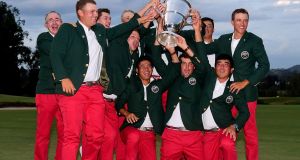 The United States regained the Walker Cup from Great Britain and Ireland with a comprehensive 19-7 victory at the Los Angeles Country Club.

Great Britain and Ireland trailed by four points heading into the second and final day and the Americans eased themselves into an 11-5 lead and within two-and-a-half points of victory after winning the morning foursomes 3-1.

And the hosts duly wrapped up victory, surrendering just one-and-a-half points in the 10 singles matches in the afternoon.

Ireland’s sole representative, the Island’s Paul McBride, couldn’t stem the tide as he went down six and five to Braden Thornberry.

Maverick McNealy, Collin Monikawa and Doug Ghim led US with four wins from four matches, an unprecedented feat in a single match.

McNealy, who plans to turn professional on Monday, said it had been an unforgettable week.

“I think it starts with the U.S. team getting that big trophy and that was our goal at the beginning of the week and I’m so excited to be part of the 2017 winning Walker Cup team,” he told the USGA.

“It’s been unbelievable. I’ll never forget this week. It’s the end of my amateur career, but it means so much more than that to me, it’s been incredible.”

Captain Spider Miller, 67, who also skippered the US team when they were beaten last time out at Royal Lytham and St Annes could not hide his delight with the performance of his team.

Miller said: “They have conducted themselves great this week, they have done everything I’ve asked, and I’m very proud of them all.”

“Got to take my hat off to them, they have been superb all week,” he said.