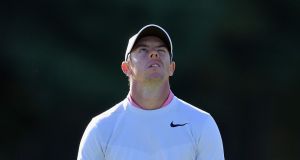 Rory McIlroy reacts after missing a putt on the 10th green during the second round of the Dell Technologies Championship at TPC Boston in Norton, Massachusetts. Photograph: Drew Hallowell/Getty Images

Rahm carded six birdies and an eagle at TPC Boston to add a second round of 66 to his opening 67 and finish nine under par, two ahead of a group of four players — American duo Kyle Stanley and Kevin Streelman, England’s Paul Casey and Canada’s Adam Hadwin.

World number five Rahm, having started on the back nine, was two over through eight holes when he rolled in a 12-footer for eagle on the 18th, before making five birdies on the way in.

“Once that happened on 18, I felt like everything clicked and I just started flushing everything and ended up with the results I did,” he told PGA Tour Live.

Asked about his prospects of converting his lead into a second PGA Tour title, the 22-year-old added: “It’s all going to start with the weather — if we have a day like today we’re going to have to play good golf to keep that lead.

“If we have bad weather it’s going to be a struggle to stay on the score that we’re on.”

First round leader Dustin Johnson – looking to make it back-to-back wins in the opening two playoff events – slipped five shots behind with a one over par round of 72 which included two double bogeys.

Casey held a three-shot lead after 54 holes in this event last year, but struggled to a closing 73 and was overhauled by McIlroy, whose victory after a final round of 65 gave him the springboard to go on and win the overall FedEx Cup title.

The 40-year-old Englishman went on to finish second in the BMW Championship the following week and fourth in the Tour Championship in Atlanta, where McIlroy defeated Ryan Moore and Kevin Chappell in a play-off.

McIlroy has not tasted victory since after an injury-plagued season and faces a battle simply to qualify for the season-ending tournament at East Lake after a second round of 74 left him four over par.

That was one shot outside the cut and an early exit saw the four-time major winner drop to 50th in the FedEx Cup standings, with only the top 30 after the BMW Championship on September 17th qualifying for the Tour Championship.

In the pack hunting Rahm at the top of the leaderboard, American trio Phil Mickelson, Grayson Murray, Bryson DeChambeau and Australian Marc Leishman were another shot back on six under, Mickelson shooting 67 and Murray carding a second consecutive 68 which included a hole-in-one on the eighth, his penultimate hole of the day.

1 Six Nations: Pundits, journalists and players have their say
2 The Offload: Doris, Kelleher and Cooney to give Ireland a new look
3 Ken Early: Klopp adds spice to ‘uninteresting’ FA Cup replays
4 All in the Game: Kylian Mbappé’s Gruyère nightmare
5 Sports Extra customers get every LaLiga match at no extra cost
Real news has value SUBSCRIBE

John McEnroe slams Margaret Court as ‘crazy aunt’ of tennis 16:36
Stokes and Wood lead England to series win in South Africa 16:18
FA say Liverpool knew about timing of potential FA Cup replay 16:28
Sports Extra customers get every LaLiga match at no extra cost 15:02
Six Nations: Pundits, journalists and players have their say 15:00
Here is your handy guide to sport on television this week