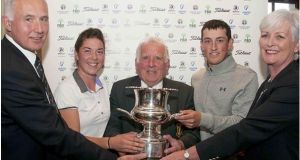 Leinster Senior panel member Marc Nolan and partner Lauren Murray from Delgany won the East of Ireland Mixed Championship at Greystones Golf Club, Co Wicklow. One shot off the lead going into the second round after an opening 73, the local Delgany pair played solid golf in blustery and trying conditions to return a 76 for a total of 149.

The 2015 winners Andrew McCormack and Chloe Ryan from Castletroy finished three shots behind on 152 after carding 74 and 78, while Irish International Stuart Grehan playing off plus four and Carla Reynolds (Seapoint) off two finished third on 153 after an opening round of 72. Best Nett was won by Jason and Joan Brennan from Castlecomer.

Dundalk’s Caolan Rafferty and Massereene’s Tiarnan McLarnon came from behind to capture the Copa Fedegolf by a massive 12 strokes at Barranquilla Country Club in Colombia. The Irish internationals went into the final round one stroke behind Argentina’s Sebastian Bergagna and Horacio Carbonetti in the team standings.

They were three behind Bergagna and Carbonetti after six holes but moved into top gear for the remainder of the round to win the team title comfortably on one-under 575.

Rafferty was three strokes behind Chile’s Lucas Rosso with a round to play after rounds of 75, 69 and 70 but closed with a six under 66, finishing with a birdie at the last to edge out his rival by one stroke for the individual title on eight-under 280.

At the European Senior Ladies’ Amateur Team Championship, Ireland captured the bronze medal when they beat Germany 4-1 at Skalica Golf Resort in Slovakia.

As France beat England 3½ - 1½ to succeed Ireland as champions, Sheena McElroy and Carol Wickham won the foursomes 4 and 3 before Laura Webb beat Werres Heike by the same margin to put Ireland 2-0 ahead.

Suzanne Corcoran then claimed Ireland’s third point with a 4 and 2 win over Susanne Lichetenberg. Gertie McMullen and Catherine O’Reilly halved their matches.

Charlesland Golf Club in County Wicklow is celebrating 25 years in business, with the club bearing fruits of a €1 million refurbishment recently undertaken to strengthen the club’s offering. Charlesland will celebrate the anniversary with a series of golf events throughout September and October and a gala evening planned for the 21st October.

Developed by the Evans family in the 1992, Charlesland Golf Club appointed Carr Golf to operate on their behalf in 2015 with the intention of using their specialised expertise to improve the presentation of the course and propel the business to a new level.

Carr Golf, the specialist in golf club management and maintenance, has made new staffing appointments recently to steer the ship; Andrew Curry to Director of Golf, Mark Ruddy to Sales & Marketing Manager; and Nikki McHugh to Bar & Restaurant Manager.

Carr Golf, working with owners’ the Evans family, last year unveiled a new three-hole academy on the grounds, resulting in 40 new junior members, driven by a new Junior Club Committee at Charlesland with development of golf tuition programs for juniors and adults.

Lance Evans, Director of Charlesland Golf Course Ltd, said of the 25-year milestone: “We are proud to be 25 years in business and very happy with the positive changes Carr Golf have implemented since coming on board in 2015, bringing with them specialist expertise and huge experience to the many challenges of golf management. The club has grown from strength to strength, shown recently by the record number of new members who have joined.”

Tullamore bridged a 17-year gap at Castlebar GC to notch up their third win in the I Need Spain Irish Mixed Foursomes, having triumphed in 2000 and at the inaugural event in 1972. On a day that started wet and windy, the sun emerged as the first point of the day was won by Matthew Grehan and Fiona Flanagan for Tullamore with a comprehensive win over Alan Purcell and Antoinette Meghen by 5 and 4.

Adare Manor squared things as Tony Davern and Ina Desmond ran out winners on the final green beating the Tullamore pairing of Eoin Marsden and Richelle O’Neill by two holes.

Martin Darcy and Eilish O’Connell added a second point for Tullamore with a win over Martin Hayes and Breda Naughton before Eoin Moran and Phil Mann levelled things again with a 2 and 1 win over Eoin Flanagan and Emily Donohue.

The drama was left to unfold in the final match as the Adare Manor pair of Brian Murray and Deirdre Keating faced Colm Cassidy and veteran of Tullamore’s 2000 winning team Cait Cooney.

The Tullamore pair went ahead early and took a commanding four holes lead around the turn. Despite the best efforts of Murray and Keating the damage inflicted early on was too much and victory was sealed for Tullamore in front of a thronged gallery on the par-three 16th green.

It was an emotional day for Cooney, the self-confessed ‘granny’ of the team. “I’m absolutley elated. It means so much to me to be part of this team this year because I have a lot of memories of 2000 but I won’t go there now. I must thank my partner Colm who was an absolute pleasure to play with and he won this match for me.”

The side was captained by Joe Morris and Una Marsden.

Casey masters the elements at Rosapenna

Local knowledge proved vital as Frank Casey Jnr from Rosapenna won the Mid-Ulster Championship over the Sandy Hills course at Rosapenna by for shots from Galway’s Eddie McCormack.

The Championship was played in challenging conditions from the start of rounds one until the final putt was held by Casey in fresh winds interspersed with heavy showers being present for all three rounds.

Mooney and Delaney join Rice at the summit

Tim Rice (Limerick GC) returned to the winner’s circle for the first time since his Irish PGA Championship success at The Kelly’s Resort Rosslare Pro-Am. The 39-year-old, winner of the Irish title in June, signed for a three under par 69 to share top spot with Damian Mooney (Damian Mooney Golf) and Tara Delaney (The Eddie Doyle Golf Academy).