Out of Bounds: Exactly two years ago a record quintet of Irishmen won the Walker Cup 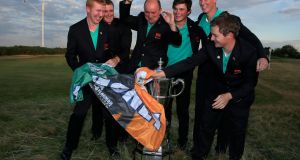 It is interesting to note that, even now, the home Twitter pages of Paul Dunne and Gary Hurley reflect a time when they weren’t playing for pay: in both cases, their profile photographs are of the five amigos - a record quintet of Irishmen - who played on the successful Walker Cup team at Royal Lytham & St Annes in 2015.

The five, let’s recall, were: Dunne (who’d already impacted on a global stage when sharing the 54-hole lead at the Open championship at St Andrews that summer), Gavin Moynihan, Jack Hume, Cormac Sharvin and Hurley.

How time flies. That was exactly two years ago, when the Britain and Ireland team outplayed a much-heralded United States team. And, for those of us who were there on that Sunday evening as new careers beckoned, it was a question of not just which one but how many of the five would go on to carve out successful lives on the professional circuits.

In this week when the Walker Cup takes place at Los Angeles Country Club, where Paul McBride is the sole Irish representative on the 10-man B&I team, it is timely to assess how the five Irishmen from Lytham have done . . . . and worth noting that Walker Cup honours alone give no one a divine right to believe that the future is paved with gold.

Unquestionably, the most successful of the Lytham Five has proven to be Dunne. For starters, he is the only one of them to have earned - and retained - a full PGA European Tour and, in this, his second season on the main circuit, has continued to trend upwards in a career progression that has not yet yielded an actual tournament win but which has seen him knock on the door (runner-up in Morocco) and contend on a number of occasions.

Dunne is 33rd in the latest Race to Dubai standings (tour card for 2018 safely bagged) and is ranked 181st in the world (sandwiched between Smylie Kaufman and Richy Werenski) and heads into the business end of the PGA European Tour season with some prime objectives within reach: that maiden tour win would solve everything of course, and he is already assured of a place in the field for the season-ending Race to Dubai final series which culminates with the DP World championship in Dubai.

For Dunne, it really is all to play for: for example, a top-30 finish in the final standings brings with it an exemption into next year’s British Open; a top-20 finish will earn entry into the lucrative World Golf Championships.

So, in just two years, Dunne has put himself very much on the golfing radar as an up-and-coming if not already arrived as a big time player.

But what of the other four?

That transition to the professional ranks has not gone as smoothly, especially in the case of Hume - who delayed his move into the paid game longer than any of the others - who failed to earn any tour status and has decided to take a break from the sport for the time being at least.

Hurley has a full card on the Challenge Tour, which is the proven gateway onto the main circuit in Europe. However, the Waterford man, hampered by injury, has struggled for any consistency this season and currently languishes in 136th in the rankings.

Sharvin is also playing on the Challenge Tour and is currently 95th in the rankings. The upside is that the Ardglass golfer has made the cut in four of his last five tournaments and a late-season surge could yet see him leapfrog upwards towards a place in the Road to Oman tour finals (confined to the top-40 on the order of merit).

Moynihan didn’t have a Challenge Tour card at the start of the season but, after sharpening his teeth on the third level EuroPro Tour, brought that form to the secondary circuit to make the most of sponsors’ invitations and earn a status that has allowed him to map out a decent schedule. As things stand, he is the best-placed to join Dunne on the main circuit next year: The Island golfer is currently 26th on the money list but within touching distance of the top-15 who will earn full tour cards on the European Tour next season.

The different experiences of the Lytham Five testify to just how difficult it actually is to move on from the pinnacle of amateur team golf, to make it in the professional game. It shows, there are no guarantees of entitlement.