Rory McIlroy: ‘I’d hate to think I’ll end this year without a win’ 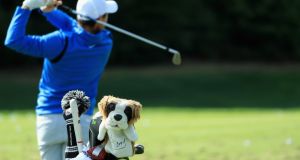 The dog headcover of Rory McIlroy is pictured on the practice ground as McIlroy practices for the Dell Technologies Championship in Norton, Massachusetts. Photo: Andrew Redington/Getty Images

Rory McIlroy admits he hates the thought of ending his season without a win as he looks to make the first successful title defence of his career in Boston.

McIlroy won the Dell Technologies Championship — then known as the Deutsche Bank Championship — in 2012 and 2016, the latter victory providing him with the springboard to win the overall FedEx Cup title and $10million bonus.

The 28-year-old has also won several other events more than once but never in consecutive years and has four chances left in 2017 to avoid just his second full winless season since turning professional.

Speaking after a tie for 22nd in the US PGA Championship which completed a third successive year without a major title, McIlroy said he was in two minds about competing again this year due to an ongoing rib injury.

”I don’t know what I’m going to do,” McIlroy, who has played just 14 events this season, said after a closing 68 at Quail Hollow. ”You might not see me until next year. You might see me in a couple of weeks’ time.”

After seeking the advice of sports scientist Steve McGregor in Northern Ireland, McIlroy was told he could not make the injury any worse and finished 34th in last week’s Northern Trust Open.

The four-time major winner will play the remaining three FedEx Cup play-off events — assuming he qualifies for the 30-man Tour Championship — and the Alfred Dunhill Links Championship with his father Gerry from October 5th-8th before calling time on his season in a bid to get fully fit for the new campaign.

“I’d hate to think I’ll end this year without a win,” McIlroy told a pre-tournament press conference at TPC Boston. “I’ve got four tournaments left to hopefully make sure that doesn’t happen.

“It would just be nice to get a win before I shut it down for a while. I feel like I’m capable. It’s not as if I’m out there making it any worse. I feel like I can still go out there and compete and if you can do that, why not give it a go?

“Of the courses that we have coming up I definitely feel the most comfortable on this one so if I didn’t get myself into the mix it would definitely be a lost opportunity.”

While McIlroy has yet to win a tournament this season, world number one Dustin Johnson has won four times, most recently beating Open champion Jordan Spieth in a play-off on Sunday.

Johnson’s three other victories came in successive events before he suffered a back injury which forced him to withdraw from the Masters and the former US Open champion has refused to rule out another winning streak in the FedEx Cup play-offs.

“You can’t win them all if you don’t win the first one, right?” Johnson told a pre-tournament press conference. “It’s definitely possible. Is it going to happen? I have no idea.

“I would love to say yeah I’m going to win all four but the odds are not in my favour. Winning last week is big because I think I am probably guaranteed to be in the top five (in the FedEx Cup standings) going into Atlanta, which is where you want to be because then if you win the tournament you win the FedEx Cup.

“That’s the biggest thing for me. This week is another big week because I want to play really well, I finally feel like I am swinging really well.”