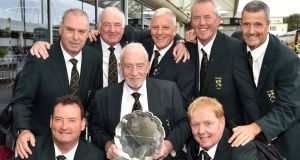 With the score locked at 2-2, Adrian Morrow (Portmarnock) held his nerve to beat Henrik Daugaard on the 21st to deliver the title to Ireland for a sixth time.

The Irish had knocked out hosts Sweden and old enemies England on their way to the final and opened the showpiece with a hard-earned victory in the foursomes – John Mitchell (Tramore) and Eamon Haugh (Castletroy) doing enough to claim a 2&1 success over Christian Langkilde and Kim Worm.

In the singles, Hans Peter Jacobsen beat former professional Jim Carvill (Banbridge) on the 19th and Karl Bornemann (Douglas) eased to a 5&4 victory over Tony Jensen to leave Ireland just one point from victory.

That meant all the focus was on game four between Morrow and Haugaard. And in a tense final clash, Morrow prevailed on the third extra hole to seal a thrilling victory.

And there was further success at the European Senior Ladies’ Team Championship as Ireland clinched the bronze medal at Skalica, Slovakia.

Having lost 4-1 to England in the semi finals, Ireland went up against Germany and eased to a 4-1 success.

Sheena McElroy (Grange) and Carol Wickham (Laytown & Bettystown) put Ireland on the front foot with a 4&3 success in the foursomes.

East Berkshire’s Laura Webb (4&3) and Portumna’s Susanne Corcoran (4&2) went on to beat Heike Werres and Susanne Lichtenberg respectively to seal the win for Ireland. Catherine Reilly (The Heath) and Gertie McMullen (The Island) were then considered to have halved their games.