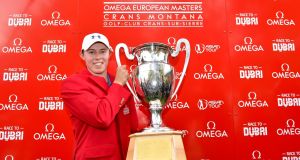 The Englishman entered the final round four shots behind Australian Hend but produced a closing 64 to get to 14 under and take the contest to extra holes in the Swiss Alps.

Hend — who lost to Alex Noren in a play-off at this event last season — missed a six-foot putt for victory on the second extra hole but found sand off the tee on the next trip up the 18th and after he flew the green with his second, a par was enough to seal victory for Fitzpatrick.

Meanwhile Paul Dunne rounded off an indifferent week with a final round 70 - leaving him on three over par for the tournament.

“I’m delighted,” he told Sky Sports. “It’s one that I’ve always wanted to win. I love playing this golf course, from the first ever year I came as an invite in 2014 it’s one that has really stood out on my schedule and I always want to come back and play.”

Fitzpatrick made four birdies and a bogey in his first eight holes to catch up to Hend and when he added further gains on the 10th, 14th, 15th and 16th, the Ryder Cup star held a two-shot lead.

Hend then hit back with a birdie on the 15th and a Fitzpatrick bogey on the 17th set up the dramatic finish.

England’s Tyrrell Hatton birdied four of his last six holes to finish at 11 under alongside Paraguay’s Fabrizio Zanotti, with another Englishman in Lee Slattery two shots further back.

Scot Duncan Stewart was then at eight under, with former world number one Lee Westwood finishing at level par in his 500th European Tour event.