Amateur showed why Portmarnock needs to be on the biggest stage 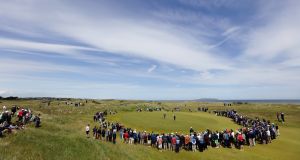 The champion? James Sugrue, for sure. The other winner? Portmarnock Golf Club, if the truth be known.

Looking back, the staging of the 124th British Amateur Championship at the north county Dublin links truly set a new standard in how the event should be done, starting with the quality of the set-up – hat tip to links manager Gary Johnstone – to the fact that actual crowds turned up to watch amateur golf.

In many ways, it was old school golf. Pure. Raw. Captivating in how it played out. And no matter which way you look at it, the quality of the links and the examination it set the players, all 288 of them who set out with that dream of lifting the famous trophy, was as good as it gets. Anywhere.

But where now? The fact of the matter is that, as things stand, that is it. No more big championships will be coming the way of Portmarnock – celebrating its 125th anniversary this year – as long as the men-only membership rule is in place. The R&A is quite adamant that going forward none of their championships will be staged at clubs where single-sex rules apply.

Indeed, Portmarnock, in many ways the spiritual home of the Irish Open on the European Tour, has already paid a price with that tournament: it first staged the event in 1927, when George Duncan won, and last staged it in 2003 when Michael Campbell triumphed.

In all, Portmarnock has been the host course for the Irish Open on 19 occasions with Royal County Down and Royal Portrush (four apiece) next in the pecking order. But that gap of 16 years (and growing) since Campbell’s win is for a reason and again it comes back to the men-only membership policy. Once one cent of government money goes towards supporting an event, any gender imbalance comes into play.

So, as it stands, Portmarnock is a no-go area for the Irish Open and the European Tour. And for the R&A.

The only ones who can change that situation are the men of Portmarnock Golf Club. If they want to. It is in their own hands; and a consultation process with the membership is currently on-going to see if the will and the desire is there for change.

One of the most interesting observations about just how good the links was for last week’s British Amateur Championship came from the Australian David Micheluzzi. His was an outsider’s view, from a player – we all assume – who is destined for great things in the game when, not if, he turns professional.

“Oh my God, if they don’t have an Open here, I will be pretty angry. I have played courses like Royal St George’s and St Andrews and this is too good. The condition is mint. I mean, this is a test . . . it was just so brutal. It was just intimidating with the rough, it’s just a brute,” said an Aussie who typically didn’t take to sitting on fences.

The Open he is referring to, by the way, is not the Irish Open but what we in these parts call the British Open. The Major. The oldest of them all. What we know, and what the course proved in the 124th staging of the British Amateur, is that Portmarnock Golf Club is good enough to stage the biggest one of them all. That’s where sights should be set.