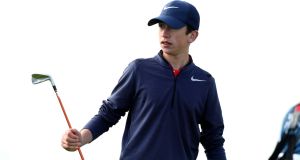 Tom McKibbin: the 16-year-old from Holywood GC shot a 68 to secure one of the 13 places on offer from the regional qualifier for the British Open at Co Louth GC. Photograph: Matt Mackey/Presseye/Inpho

No roller-coaster ride for Dylan Keating, as the 16-year-old – a nephew of singer Ronan Keating – had only an upward trajectory in the regional qualifying for the 148th British Open at Co Louth Golf Club.

Keating was among a number of young guns who negotiated a route to next week’s final qualifying at venues in England and Scotland and kept alive the dream of making it all the way to Royal Portrush.

Tom McKibbin, another 16-year-old, also secured one of the 13 places on offer from the regional qualifier. The Northern Irish teenager, from the same Holywood Golf Club that produced Rory McIlroy, has been in stellar form this season with the Junior Invitational at Sage Valley, the biggest junior title in the USA, and the highly coveted Peter McEvoy Trophy among those titles he has already lifted so far.

Among those who failed to progress however were former world snooker champion Shaun Murphy and Gary McNeill, the longtime club professional at Royal Portrush.

Play was suspended for one hour and 45 minutes in the early afternoon due to thunderstorms in the area but Keating, from the neighbouring Seapoint club, was unaffected as he topped the qualifier at Baltray with a magnificent round of six-under-par 66.

Keating – winner of the Irish Boys’ Championship last year and this year’s junior captain at Seapoint – had a quite brilliant spell which yielded five straight birdies from the seventh hole: his run of 2-3-3-3-3 in that stretch enabled him to build a solid base for his round, which ultimately led to the young amateur claiming leading qualifier honours.

In all, Keating had seven birdies and a lone bogey, on the second, as he ensured a trip to final qualifying which takes place on next Tuesday, July 2nd at four venues in England and Scotland (Notts Hollinwell, Prince’s, St Annes Old and Fairmont St Andrews). There will be three places on offer at each course.

Keating’s 66 led the way, one shot clear of veteran amateur Joe Lyons and Dooks-attached professional Dan Sugrue. The Kerryman had a superb inward run of 31, including four birdies on his scorecard.

McKibbin, who recently completed his GCSE exams, competed in last week’s British Amateur but failed to get through the strokeplay qualifying stage. However, he played a bogey-free round with four birdies to ensure that he would move on to final qualifying next week in his bid to make it to Portrush.

A group of 10 players signed for 69s, which necessitated a play-off for five places.

Meanwhile, Murphy, who won over €3 million in an honour-laden professional snooker career, was unable to transfer that sporting magic onto the links in his bid to play in an Open championship. The English man entered qualifying at Co Louth but struggled to an 84, managing only one birdie.

In the regional qualifier at Minchinhampton in England, Mount Juliet-attached professional Kevin Phelan advanced to the final qualifying. The Waterford man shot a four-under-par 68 to finish in tied-sixth.

Paul Dunne and Gavin Moynihan are the only Irish players involved in this week’s European Tour stop, the Andalucia Masters at Valderrama. Both players are attempting to bounce back from missed cuts in the BMW in Germany and to get some form ahead of next week’s Irish Open. Séamus Power is in action on the PGA Tour, at the Rocket Mortgage Classic in Detroit.

Stephanie Meadow is also looking to bounce back from a narrowly missed cut at the KPMG LPGA Championship when she competes in the Walmart Arkansas Championship on the LPGA Tour.