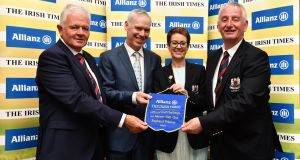 The golfing gods looked after those who played in the most recent Allianz Irish Times Officers’ Challenge at Malone Golf Club in the Belfast suburbs.

No sooner had all the competing clubs finished their rounds, and packed away their equipment, than the heavens opened with an unmerciful cloudburst.

By then, though, their work was done; and it was the three-person team from Dundalk Golf Club – men’s captain Pat Davis, lady captain Criona O’Reilly and honorary secretary Seán Hession – who ultimately had most to smile about in landing the spoils with an impressive team total of 81 points, to ensure their presence in the national final at The K Club in September.

All three of the Dundalk team contributed birdies, which was a testament to their impressive all-round contribution in compiling a winning score – two from three to count on each hole – that gave them a two points winning margin over Balmoral (79 points).

Host club Malone (76 pts) used sufficient local knowledge to also guarantee a place in the finals at Straffan as they claimed third place.

For Dundalk, the win ensured another pennant for the wall of the clubhouse at Blackrock which, of late, has seen quite a lot of silverware come through the doorway thanks to the exploits of Caolan Rafferty, Brendan Lawlor and the club’s Barton Shield team who recently outgunned both Portmarnock and Carton House to advance to the upcoming provincial semi-finals.

Rafferty’s success on the amateur circuit has seen both the West of Ireland and South of Ireland trophies showcased in a display unit in the club, alongside the R&A tankard he received in setting a course record at Prince’s in heading strokeplay qualifying for the British Amateur a couple of years ago.

Indeed, quite a number of club members have booked their travel – by plane and ferry – for the Walker Cup at Royal Liverpool in September in the hope that Rafferty makes that Britain and Ireland team.

Maybe the silverware on display provided some level of inspiration for their short trip up the M1 to the tree-lined Malone course, for the Dundalk trio combined brilliantly with the play of lady captain O’Reilly especially impressive.

The three started on the 10th hole, and it was O’Reilly who got the birdie blitz going with a wonderful two on the 15th, the signature hole: there, she hit a pitching wedge over the water hazard to 15 feet and sank the putt.

O’Reilly, indeed, had a quite remarkable run for a stretch of seven holes – from the 13th to the first – which she covered in level par (gross) in contributing a string of three pointers to the scorecard.

For his part, Davis came in with a birdie on the 17th (their eighth hole) where he played the Par 5 superbly, reached the green in regulation and holed the 12 footer for birdie.

And there was very nearly a fifth hole-in-one of his playing career for Hession, whose 6-iron tee-shot to the sixth finished six inches from the cup. Of his four aces, three of them came in competition – one at Royal Tara, two at Dundalk – while the other one came in playing a casual few holes on his own one evening with no-one to witness it.

Dundalk – along with Balmoral and Malone – progress on to the national final in The K Club on September 3rd, joining those who have already come through the events at Portmarnock Links and Cork. The remaining qualifying events will take place at Mount Juliet (July 2nd) and Galway Bay (August 13th).

1 Six Nations: Ireland are contenders but England still the team to beat
2 Mike Catt hopes to have Irish backs purring in Six Nations
3 Owen Doyle: Creeping professionalism of schools rugby a threat to the game
4 In Donegal Michael Murphy is seen, simply, as a godsend
5 Nick Kyrgios sets up Rafael Nadal showdown after five-set thriller
Real news has value SUBSCRIBE