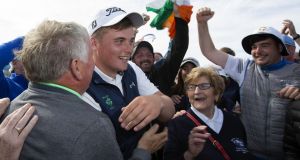 James Sugrue punched his ticket to the big time – with exemptions into next month’s British Open at Royal Portrush, along with next year’s US Masters and US Open – in out-dueling Scotland’s Euan Walker in a a battle of the young guns at a fascinating British Amateur Championship final at Portmarnock Golf Club, the final going the full 36-hole distance before the 22-year-old Cork man secured a famous one hole win.

Sugrue’s success – the eighth Irishman to achieve the feat, and first since Alan Dunbar in 2012 – also likely secures him a place on the Britain and Ireland team for the Walker Cup match against the United States at Hoylake in September.

Sugrue was forced to show his fighting qualities along with his array of shot-making: having seen a five-hole lead leak, to the point where the two men were on level terms standing on the 17th hole of their second round. The Mallow player stubbornly stuck to his guns and got back in front on the penultimate hole, where Walker was in trouble off the tee and his approach finished in wispy rough in front of the green. The Scot pitched to 12 feet, but missed the par putt; and Sugrue had again regained control of his own destiny.

The 18th hole, which had proven a villainous one to Sugrue some five hours earlier, brought redemption when it mattered most. Sugrue’s tee shot miraculously bounced through a fairway bunker, for the ball to finish above the lip; while Walker’s tee shot was right, wildly so, and he was forced to march to the top of a mound to use his range finder in both directions to work out the distance to the flag.

The drama continued. Sugrue’s approach pitched on the firm green but ran through and down the slope, while Walker’s blind approach also hit the green and bounded on down the slope. The Scot opted to use his putter from the first cut of rough and paid a heavy price. The ball ran up the slope and briefly found the putting surface only to run back to his feet. Sugrue, with the advantage, chipped to ensure his ball found the green some 12 feet from the pin. Walker’s fourth short did find the green, but Sugrue’s putt was nursed up to the hole and Walker knew his fate. He conceded, and shook the hands of the 124th Amateur champion.

To his enormous credit, Walker too played a huge part in a drama-filled final. He was five-down when turning through nine holes of the first round and, step by step, stuck to his task – his putting exemplary for the most part – and managed to get back to all square when winning the Par 3 15th, where Sugrue paid the price for his tee shot finishing in the Valley of Sin.

Sugrue joins Jimmy Bruen, Max McCready (who won on its only previous staging at Portmarnock in 1949), three-time champion Joe Carr, Garth McGimpsey, Michael Hoey, Brian McElhinney and Dunbar – in what is a life-changing achievement.