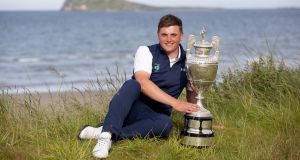 James Sugrue is a big, strong man as he proved in the manner of his victory in the 124th British Amateur championship. First through strokeplay qualifying and then through matchplay, the 22-year-old plus-four handicapper from Mallow, Co Cork,w as the last man standing on the 18th green at Portmarnock Golf Club on Saturday evening.

The 6ft 2in player – he beat Scotland’s Euan Walker in a 36-hole final that went right to the final green – claimed the gold medal as Amateur champion and exemptions into next month’s British Open at Royal Portrush, next year’s US Masters at Augusta National, and next year’s US Open at Winged Foot.

When his final tap-in putt was conceded by Walker on that final green, the reality of his achievement was acknowledged by the huge gallery at the north Dublin links.

“It’s so hard to believe that I’ll be going to the Open and the Masters. There are a lot of pros that play golf their whole life and don’t get to play in a Major. Now I get to play in three of them. It’s hard to believe, really hard to put into words. I’m just absolutely delighted,” said Sugrue, clasping the old trophy (without the base to lighten the load).

The victory has postponed for now any thoughts of turning professional as those exemptions into the Majors come with the caveat that he remain an amateur. The victory has also earned him a place in the Britain and Ireland team for the Walker Cup against the US at Hoylake in September, which was his primary target at the start of this season.

As for winning the Amateur?

“I was hoping to have a good week like everyone else, but I wasn’t expecting to win it, especially because I hadn’t played Portmarnock since I played nine holes with Darren Clarke at one of those champions weekends when I was 15.

“ I couldn’t remember any of the holes, and only played one practice round. I thought that would go against me as the week went on, but it didn’t. I got to know the place. It’s as you see it anyway. It’s tough but fair. If you hit a bad shot, you will be punished. And if you hit a good shot, you will be rewarded.”

The story of Sugrue’s win is of a man who wrote his own script. He birdied the 18th hole in strokeplay qualifying at The Island to guarantee his place in the matchplay phase, and then in the knockout phase he showcased resilience time and time again.

He won the last four holes of his round-of-32 match to beat England’s Harry Hall on the 18th; birdied the 18th in his quarter-final with Dutchman Koen Kouwenaar to then win on the 19th; took out the highly-touted Australian David Micheluzzi in the semi-finals, an, finally, won the epic final with Walker.

While he said that there were an almighty amount of candles reputedly lit in the Mallow area during the week, the acquisition of a new driver and 3-wood proved critical.

He had made contact with “the lads from Titleist” in advance of the championship and met with them on the range during one of the practice days. “They had Trackman, and I tried a few things. Then they fitted me for one, I liked it, and I used it for the week. The flight was way better and I know for a fact that if I had been using my old ones I wouldn’t have won.”

His putting was also assured. As he put it, “my putting all year has been shocking. I have been hitting it so well, and for the last week, I haven’t hit it well, just chipped and putted well. It is the complete opposite to what has been happening the whole year, where I have just ripped it around and having 38 putts. It’s really frustrating, but I thought it will come. It will even itself out. The golfing gods or whatever.”

On the night before the final the thoughts of making it to the Masters at Augusta delayed his sleep. “I couldn’t sleep. So I had to listen to a podcast – Joe Rogan – and went to sleep listening to that. It’s a bit of a cliché but it is lying in bed when you would think of it. Thankfully I am going there now.”